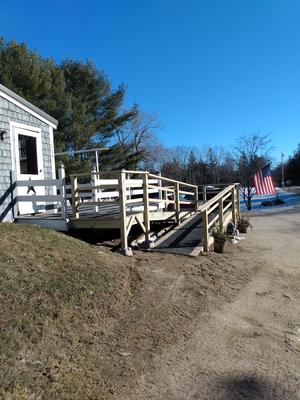 Ree Hamilton’s new accessible ramp, constructed and donated by the Independent Order of Odd Fellows Lodge 142 out of Brooksville.

When 73-year-old Ree Hamilton returned from her nine-day stay at Northern Light Blue Hill Hospital, she wasn’t able get up the steps of her own home. Hamilton, whose mobility is hampered by cellulitis in her legs, was forced to call 911 for assistance. She was certain that if she left her house for an upcoming doctor appointment, she would not be able to get back in.

Almost two weeks later, a brand new accessible ramp was in place on Hamilton’s front porch, constructed by volunteers from Governor Brooks Lodge 142 of the Independent Order of Odd Fellows in Brooksville.

Daryl Astbury, Hamilton’s nephew and a member of Lodge 142, told his fellow Odd Fellows of his aunt’s issue. After voting unanimously to help, a team of six volunteers—Boyd Black, David Grey, Tom and Marty Tapley, Bob Bakeman and Joe Devlin—showed up to Hamilton’s house with a hand-built wooden ramp that would allow her to come and go as she pleases.

Black, a member of Lodge 142 and the leader of the project, has built ramps for four other community members with disabilities, including Hamilton’s 93-year-old mother. The lodge donated all the material and labor and had the project finished in time for Hamilton’s next doctor appointment.

“It was impressive the way the guys came out,” said Joe Devlin, the lodge’s secretary.

Black and the rest of Odd Fellows Lodge 142 have a particular focus on community service. In addition to service projects like Hamilton’s ramp, they run a monthly free dinner for the “Meals for ME” program at the Brooksville Town House and raise money for the Brooksville Elementary School.

Hamilton has already put mileage on her new ramp and expressed her sincere gratitude towards the volunteers and the entire Odd Fellows Lodge: “I have no worries about getting in and out of my home now; these men were a godsend!”