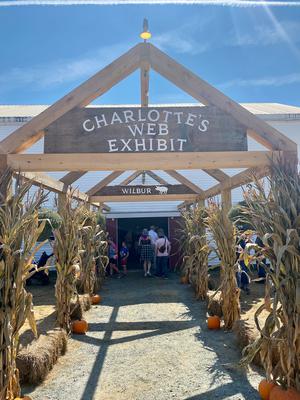 While exact numbers are not yet available, the 131st Blue Hill Fair, which took place September 1-5, seems to have enjoyed unprecedented attendance.

“It’s too early to know where we stand, but we probably saw one of the busiest weekends we’ve had at the fair in recent memory,” said fair general manager Erik Fitch during a Tuesday morning phone call. While Fitch reported happy attendees, vendors and exhibitors—citing “a lot of positive comments” from all—Monday’s rainy weather put a slight damper on things. “The carnival did not operate. The rides can’t operate in the rain, there’s no way,” said Fitch, who estimated that three-quarters of the vendors stayed open despite the wet weather and that umbrellas were plentiful on the grounds. As an added incentive, the fair opted to eliminate the entry fee on Monday, allowing those venturing out in the rain to enjoy the fair for free.

The new exhibits this year were a hit—particularly those related to E.B. White’s Charlotte’s Web. Fitch believes that the Charlotte’s Web Live Play (from The Grand Theater of Ellsworth) marked the first time live theater was put on at a Maine state agricultural fair. “I did not realize there would be that many people willing to sit there and watch a play, and there were hundreds and hundreds and hundreds of people…it went over very well,” said Fitch. Also popular was the Charlotte’s Web Exhibit, featuring a live pig as the book’s character, Wilbur. Fitch reported that many fair goers visited multiple times a day, just to check in and see what Wilbur was up to in his pen.

Now comes the clean-up. “It certainly is a lot of work,” said Fitch, “long days and short nights…we try to have the fair grounds look like we did not have a fair here basically in two weeks time. We got here at 5:30 this morning to start breaking things down.” As the dust settles on 2022’s fair, the overall sense is one of gratitude from the crew that made it all happen: “We’re grateful for all our patrons. Without them making the trip to Blue Hill, this would not be possible,” said Fitch.

Next week’s Packet will have a overview spread with more stories about the fair, photos and results from fair superintendents.