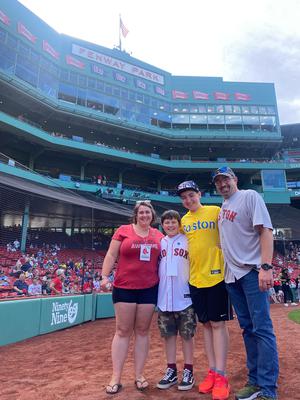 “It really was a once in a lifetime memory for sure,” said Jess Conrad of an outing she and her family took to Boston over Labor Day weekend. A group of six people, including Conrad’s son Brady and his brother Owen, traveled from the Blue Hill Peninsula to attend a baseball game. The Red Sox were playing the Texas Rangers, it was “Maine Day” at Fenway Park—and Brady would be throwing out the first pitch.

Blue Hill resident Brady Hutchins, 16, is a junior at George Stevens Academy. On June 1, 2021, at the age of 15, he was diagnosed with chronic myeloid leukemia, a blood cancer. A baseball lover, Hutchins’ wish to see the Red Sox play was granted by the Make-a-Wish Foundation. Then, as a separate gesture from the foundation, Maine Governor Janet Mills added a cherry on top: she had been asked to throw the first pitch at the game and handed the honors over to Hutchins.

“When people hear the word cancer, they get scared. The unknown is obviously scary. But the thing with Brady is that the way he’s handled it all with grace and perseverance. He’s so much stronger than I ever thought a teenager could be,” said Conrad.

As for the prognosis, Conrad said that while the cancer stays in the blood, there is a possibility for deep remission, but Hutchins will always have to monitor it. “It will kind of be like a roller coaster. But he hasn’t had any side effects. And he’s able to do all the things a 16-year-old is able to do. And that’s been awesome,” said Conrad. Who knows if that first pitch set the tone for the game, but the Red Sox took home a win on Saturday. 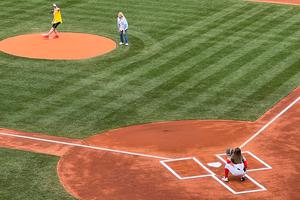 Brady Hutchins, 16, of Blue Hill throws the first pitch at Fenway Park on September 3 when the Red Sox played the Rangers. 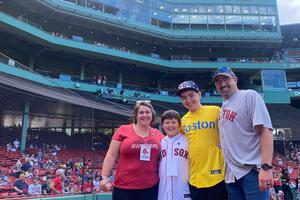