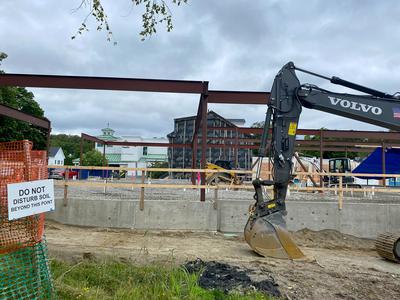 The beam ceremony scheduled for September 20 was canceled due to bad weather, but construction on the Northern Light Blue Hill Hospital forges ahead with the timeline intact for a fall 2023 opening.

Despite being slated to happen “rain or shine,” the topping-off ceremony that had been planned for 10 a.m. on Tuesday, September 20, at Northern Light Blue Hill Hospital was canceled early that morning by hospital personnel. The decision was made due to the “awful” weather forecast, said Kelley Columber, hospital communications director, in an email.

The event was to include the placing of a final beam on the new hospital structure, and both Northern Light President and CEO Tim Dentry and Northern Light Blue Hill Hospital President John Ronan were to be on hand to speak to invited staff, donors and media.

Columber confirmed that the construction timeline is still on target and said in a press release that “work on the structure will continue through the winter and spring months in preparation for a fall 2023 opening.”

As of now, steel work is complete, floor slabs are being poured and roof trusses (to be followed by metal decking) are going up. The hospital remains open and public access continues to be from Parker Point Road.