The characters of Charlotte’s Web had an extra special presence in this year’s fair. In addition to the new exhibit mimicking Zuckerman’s barn, The Grand Theater in Ellsworth brought a stage adaptation of the story to the fairgrounds.

The Grand performed adaptations of E.B. White’s famed story about Wilbur the pig and Charlotte the spider in the past. According to Ashley Terwilliger, community relations manager at The Grand, they performed Charlotte’s Web with puppets a few years ago. In June, they performed the same rendition at the Woodlawn Museum.

Terwilliger, who directed the play, said that after the success of the Woodlawn Museum show, Kim Fitch, operations manager at The Grand, had the idea to bring it to the fair. Terwilliger loved this idea.

“Plays, for me, they feed off of energy,” she said. “And being at the Blue Hill Fair means that you have all that energy of the kids and the rides and the games and the food feeding into the show.”

Ben Carter, who played three roles— The Gander, Uncle the Pig, and Mr.Carter the news reporter—said performing at the fair enhanced the production.

“It was great to be able to take part in the fair that influenced the book. The fair definitely made it more immersive in the telling of the story,” he said.

Over the course of the fair, The Grand put on six performances. The Labor Day performances were canceled for weather. Terwilliger said each performance had a great turnout and positive feedback.

“It went better than I anticipated,” she said, noting a lot of laughter and engagement from the crowd.

“Sometimes the kids even tried to talk with the actors,” she said. “Like when Wilbur is looking for a friend, one little girl from the audience said, ‘I’ll be your friend!’ It was really cute.”

For Carter, interacting with the kids was among some of the “most memorable experiences of the weekend.” He said it was clear the kids loved feeling part of the show and wanted to take pictures with the cast afterward. “It was exciting to be able to create memories for them of their time at the fair,” he said.

For Terwilliger, the message of Charlotte’s Web is very relatable, which is what makes it a great show for a stage like the Blue Hill Fair

“Basically at its roots, it’s a story about friendship, “ she said. “And I really love that because in this day and age, sometimes I think complexity is the most popular thing to see in a show. And this is just very basic, but it’s still very powerful.”

Carter also hopes the audience took away the same message. “You may find friends in the most unexpected places. Kindness goes a long way,” he said.

Terwilliger said many people pulled her aside to tell her how much they loved it, including someone from Auburn who was glad they woke up early to drive over two hours to come see the play. Many in the audience are ready for an encore.

“People are asking if we can come back next year,” Terwilliger said. 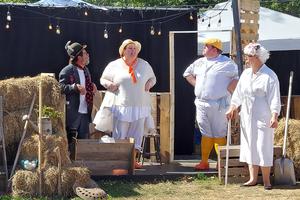 From left, Brent Hutchins as Templeton the Rat, P.J. Keenan as Goose, Benjamin Carter as Gander and Genevieve Brown as Sheep perform an adaptation of Charlotte’s Web at the Blue Hill Fair. 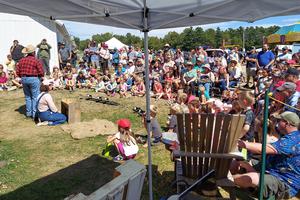 An eager audience watches a live play of Charlotte’s Web at the Blue Hill Fair, performed by The Grand Theater.