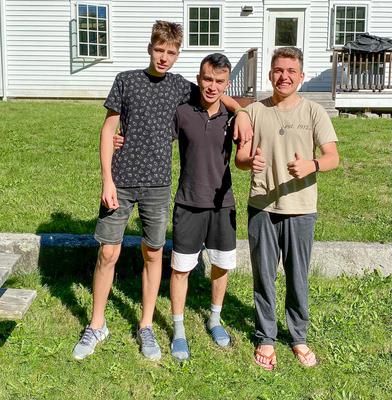 GSA students, from left, Kyrylo Salo, Ali “Mahdi” Hussainzada and Levko Fedorak pose on the lawn of Hinckley House dorm where they now live. Hussainzada has come from Afghanistan while the other two boys are here from Ukraine.

Last fall, GSA’s dean of students, Todd Eckenfelder, received an email from a former student. The student was someone Eckenfelder had taught during his time at Wasatch Academy, a boarding school in Mt. Pleasant, Utah, and the gist of the message was, “I’d love for my brother to get out and go to your school.” In this case “get out” were the operative words; the former student’s younger brother was stuck in Taliban-ruled Afghanistan with the boys’ mother.

At the same time as this message landed in Eckenfelder’s inbox, GSA’s director of boarding, Bob Slayton, was having a lunchtime meeting with a community member where the discussion centered on ways to increase the school’s foreign student population. Slayton happened to talk to Eckenfelder immediately after the lunch.

It was like, “Bam! There it is!” said Slayton. Put another way, “I believe ‘synchronicity’ is the technical term for that,” said GSA principal Tim Seeley.

The next steps were to procure funding and to figure out how to get the student, whose name is Ali Mahdi Hussainzada, known as “Mahdi,” safely out of Afghanistan. The former task was more straightforward and happened in a swift and serendipitous manner: one of GSA’s board members who attends St. Francis by the Sea Episcopal Church mentioned the situation to the pastor, who then shared the information with the congregation, and donations flowed in.

“The fundraising part was fascinating—it came from all over the community, from many local churches. The funding has been community-generated and was not GSA-initiated,” said Seeley.

From Kabul to Blue Hill

Relocating Hussainzada to the U.S., and procuring visas for him and his mother, was a process that started about a year ago, in September 2021. “Getting a visa to the U.S. was not easy,” said Seeley, who added that once they were able to get Hussainzada and his mother on a bus out of Kabul, the two were then delayed at the Pakistan border, and then stuck in Pakistan for more than eight months.

Seeley and Slayton both stressed the ways the community rallied to figure out logistics, citing ex-foreign services people and those with various international connections working on the Maine end of the equation to make it happen. Hussainzada and his mother arrived in the United States on July 6 and first went to Utah, via New York, to reunite with Hussainzada’s brother and father before Hussainzada arrived in Maine in August.

From Ukraine to Blue Hill

Levko Fedorak and Kyrylo Salo, the two students who’ve come from Ukraine, via Poland, had a different, more condensed whirlwind of a journey to GSA. While they’d applied for scholarships and the school was hoping they could come (they were originally made aware of GSA through a former GSA employee who has Ukraine connections), neither knew if they’d be able to travel to the U.S. for certain until the last few days of August.

The delay in getting Fedorak and Salo to Maine was rooted in the lack of funding. “We just didn’t have the funds in hand to say, ‘Okay, you can come,’ said Seeley, who added that the financial support once again showed up through the community—the churches especially. Seeley and Slayton said that the Blue Hill Congregational Church, the Baptist church, the Episcopalian church (St. Francis) and others all made announcements during their services.

“In all cases the process started before we had funding…and the generosity of people just kept coming.” said Seeley.

“That is to say that goodwill around here is so broad,” chimed in Slayton. “It’s heartwarming,” added Seeley.

A learning opportunity for all

Seeley said of all three of the refugee students: “Being here is a wonderful opportunity for them and we’re delighted to be able to do this for them in this really fractured world.”

He added that it will be transformative for their peers and the people the boys get to know at GSA and in the community to hear their stories. “It’s a whole new level of learning from someone who has been through something completely different from yourself,” said Seeley.

GSA currently has 14 boarding students representing eight different countries. Of note, considering all the church-inspired support: GSA is a non-denominational school per its founder, George Stevens, who explicitly stipulated that the school would be open to all religions.