Blue Hill
Originally published in The Weekly Packet, May 5, 2022
Sewell P. Snowman and the Civil War
His story, and others, preserved with the help of the historical society 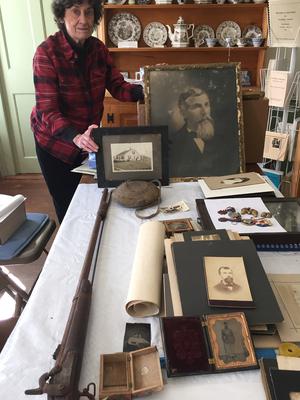 Curator Ann Durgin stands among the collected artifacts that help to tell the story of Sewell Snowman’s life.

—A case of mumps and measles probably saved Sewell P. Snowman’s life. He enlisted on March 11, 1864, and was assigned to Company D of Maine’s 31st Regiment, part of the famed Army of the Potomac, but he was too sick to join the regiment in Virginia until July 1864. By that point, they had already fought in some of the worst battles of the Civil War. He survived and was mustered out as a corporal in July 1865. His regiment lost 359 men, more than half of whom died of disease.

Snowman was born in Brooksville in 1838 and lived in Sedgwick and Blue Hill. He went to sea as a young man and traveled around the globe. In December 1860, he was in Charleston, S.C., when that state with six others declared secession from the Union. He later described witnessing “the first wanton insult to the flag,” when a posse of men dragged four cannons onto the Charleston pier and ordered the captain of the New York Mail Steamer to haul down the American flag or be fired upon.

Snowman saw action in Virginia at the Battle of Poplar Springs Church, the attacks on Fort Fisher and Fort Davis, and the siege and fall of Petersburg. He returned to his family in Maine in July 1865. He had married Carrie M. Peters in 1862, and they lived and worked on the homestead farm of her father, Daniel Peters. Snowman became a charter member of the James A. Garfield Post #46 of the Grand Army of the Republic. He died on February 26, 1932, and is buried in Seaside Cemetery.

Fortunately for historians, Harrison A. Tripp, a lawyer, interviewed the veterans returning to Maine and made a handwritten record of their lives, which has been preserved in the Maine State Archives. The Blue Hill Historical Society has copies of 31 interviews of Blue Hill veterans, including Corporal Snowman (his rank at the end of the war).

Snowman’s great-granddaughter Dola Hinkley, of Greenville, recently donated his Civil War rifle, bayonet and canteen along with a collection of family photographs and papers to the Blue Hill Historical Society. The donation came as a surprise to the society’s curator, Ann Durgin, who described the gift as very important. To date, the society had few artifacts from any of the men and almost no photographs of them when they were young or in uniform.

Durgin said, “We [now] have an opportunity to know him and his family better than most.” A selection of Snowman’s Civil War artifacts will be on display at the Holt House in Blue Hill this summer.