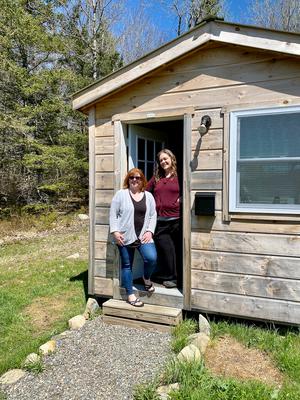 Jessica Valdez, left, and foster mother Ashley Pesek stand in the doorway of the tiny house on Pesek’s property in Sedgwick.

When Ashley Pesek learned that one of her foster kids was going to become a mother herself, she enlisted her friend and neighbor, Jessica Valdez, to brainstorm the best way to appropriately support the mom-to-be. The women are seasoned in helping those who are struggling—Pesek is a therapist, the executive director of Opiate-Free Island Partnership and a longtime certified foster parent, while Valdez is a former educator and the current executive director of Community Compass. (See below to learn more about Community Compass).

Pesek and Valdez knew that the pregnant teen was close to aging out of the foster care system. They also knew that they couldn’t allow her to fend for herself when that day came; the young woman had no support in the form of “suitable adult relatives,” and her pregnancy was the result of an abusive romantic partnership.

“She needed to stay. This was us problem solving with how to keep this girl in our sphere without sending her back to an abusive relationship,” said Valdez.

The “this” to which Valdez is referring is the tiny house that sits at the back of Pesek’s property in Sedgwick. After exploring grant options to fund the building of the house, the women realized that the uniqueness of the situation plus the hard deadline (the baby’s due date) meant that they’d have to be creative.

They crowdsourced the entire cost of the structure, which was roughly $12,000. The endeavor took about four months, and the tiny house is equipped with electricity, internet and a kitchenette. Missing is a bathroom, which was not included due to budgetary and time constraints, though they hope the next one will include a bathroom.

Yes, there will be another tiny house—on Pesek’s property, for sure, and also wherever else they can find suitable spots. “If there are foster families out there willing to do this, we’d like to talk to them,” said Valdez.

The women have seen firsthand that this system works. “The tiny house gives the appropriate freedom for older teens. The kid might need extra support to bridge gaps, but they also need separation at that age. This situation gives immediate support while allowing for necessary autonomy,” said Pesek.

Echoed Valdez, “We’ve seen this tiny house be successful…It’s like your own little tiny apartment, but you’re within earshot of help if you need something.”

Pesek shared that the guidance she’s offered her foster kids has run the gamut from how to open a bank account or secure a car loan to how to do a load of laundry or send a letter. Regarding the latter, she said that every single foster child she has had was stumped by the mail. “They didn’t know where the stamp went, how to write a return address. When you don’t have stability in your family of origin, where do you go to ask these things?”

As for the pregnant teen, she had her baby within a month of moving into Pesek’s tiny house. Because of the cacophony a house full of kids inevitably creates, it was crucial for the infant that this young woman have her own quiet space. It was also crucial to still have access to help for “all those things that new moms struggle with,” explained Pesek, particularly because “her learning gap was bigger because of how she’d been parented.”

After living in the tiny house for a year and a half, the teen and her baby moved into an apartment of their own. The month of her departure, another of Pesek’s foster kids moved into the tiny house—an 18-year-old boy who will be graduating from high school this spring. He’s currently deciding between two Maine schools for college and, when he goes, another teen will be ready to move in.

“If this story speaks to you in any way, shape, or form, contact us and we’ll find a way to get you involved. You don’t have to put a tiny house on your property,” said Valdez.

Pesek agreed. “There are ways for people to be involved that are not always super visible.”

Both women cited the need for people to consider donating not only through funding but also with skills. Builders, electricians and other craftspeople can all help—as can anyone wanting to contribute to making a big difference through this tiny house program.