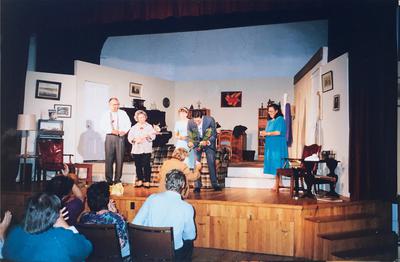 The cast of Who’s Afraid of Virginia Woolf? receives flowers from the audience.

In the summer of 1972, Bill Raiten formed New Surry Theatre. He taught acting classes that culminated in 10 sold-out performances of Fiddler on the Roof in the barn in Surry.

Fifty years and five more Fiddlers later, the theater is still going strong. NST has grown, evolved and is as tight knit as ever, instilling a passion for truth, performance and community in all who walk through its doors.

“You have to teach people to be truthful on stage. I hope to instill a love of learning in every student,” Raiten said in a 2016 Weekly Packet article.

Throughout the 1970s and ’80s, the theater grew to include more classes and performances, including Man of La Mancha, where Raitin is said to have ridden a donkey throughout Ellsworth to promote the show. In 1992, Raiten also formed Theater Art Works which used theater and musicals to get youth back to school and develop career skills.

NST traveled abroad to cities like St. Andrews, New Brunswick, as well as a Performances for Peace tour to Leningrad, USSR (now St. Petersburg, Russia). Among the 25 to travel to Leningrad in 1989 was Dindy Royster. She said the language barrier was a challenge, but she remembers that the Russian audience especially enjoyed all of the music and a play called Triplets, that Royster co-starred in as one of three babies.

A decade earlier, Royster had never done any kind of theater. But in 1979, she was asked to help read lines and fill in as stage manager at NST. “And that was the beginning of it,” she said.

Over 40 years later, Royster’s had nearly every role—student, stage manager, actor, director, board member and cast party organizer. She helped NST become a nonprofit in the 1980s, which allowed them to fundraise and gain community support. “That was really the beginning of a solid, something you could see a future from,” she said. Since then, she has watched NST evolve from a one-man-show to a thriving community.

The evolution includes her own. For many years, Royster stayed backstage. However, Raiten eventually convinced her to try on stage. “Bill is very persuasive,” she said. Royster’s first speaking part was in 1988, which was the lead role of Amanda in The Glass Menagerie. Suddenly, she had over 90 pages of lines to memorize.

“It was paralyzing but also liberating in a way,” she said. “Because I had no idea whether I would actually open my mouth and something would come out.”

Her lines did come out, and more would come for decades. Her favorite play was NST’s 1991 production of Who’s Afraid of Virginia Woolf?, where she played Martha, co-leading with Raiten as George. “It’s just a great play,” she said. “Martha is a real character. You can just let go with her.” She went on to direct the same play 25 years later, which also happened with Steel Magnolias.

Royster said her experiences with NST impacted her off the stage as well, including giving her a boost to go back to college at the age of 50.

“I think the biggest thing was developing my own confidence on what one could do,” she said. “[Theater] is the one thing that I have found that continually keeps my interest at from the beginning to the end of it. Every play is a new experience and you go from not knowing anything to having a cohesive production. And this process I like most of all, rather than the end result being on this stage,” she said.

She saw the power of transformation in others too. “The main thing that caught me in the very beginning was the way Bill could transform a wooden kid into a character that was real and emotional and not afraid,” she said, noting her love for the intergenerational aspect of the theater. “You just don’t have any lines between [generations] because you’re all working towards the same goal.”

Nolan Ellsworth, an actor who grew up on the Peninsula, feels the same.

As an 11-year-old boy, Ellsworth joined his first NST cast in the 2006 production of Fiddler on the Roof at The Grand in Ellsworth. NST needed lots of children for this production, so Ellsworth and his brother got recruited. Their dad also joined the cast. Ellsworth hadn’t thought about acting before, but NST changed that for him.

“It was this magical, magical summer,” he said, recalling hanging out with other kids behind The Grand waiting for their scenes, wearing fun costumes, climbing a tree and falling in love with theater.

A 2006 review of the Fiddler on the Roof in The Ellsworth American reads, “There is a freshness, an innocence that no Broadway company ever achieves. It’s professional, but it’s not stiff or perfect. It’s hometown, but it’s hometown that can go to town and hold its head up high.”

After the “formative” experience in 2006, Ellsworth took many of Raiten’s acting classes and would go on to perform with NST throughout high school, including his favorites like, The Wizard of Oz and Oliver!. “Bill’s spirit of fun, theater work ethic, and theater magic, really made an impression on me,” he said.

When he was 15, Ellsworth was granted the lead role of Joe Hardy in Damn Yankees, a musical about baseball. “They trusted me to be the lead. I remember being so absolutely scared. And just feeling nerves on a level I’d never felt before,” he said.

Ellsworth remembers “rising to the occasion” with the help of Raiten and Damn Yankees director Bec Poole. Despite being “not the greatest singer” and a live bat making a long guest appearance during one of the shows, Ellsworth closed out Damn Yankees with a lot more confidence. “That was a life-changing summer,” he said.

After Ellsworth left for college, he returned many summers to teach children’s workshops with NST. He now lives in Portland and continues to act with Portland theater groups. He’s also an educator at the Children’s Museum & Theater of Maine, passing on lessons from NST to the next generation. He still feels inspired by Raiten’s humor and approach to a creative life.

“Bill often says, ‘Acting is truth.’ And I often think of that,” he said. “What feels true for me or what resonates seems to ring true to folks in the audience, and my other cast members. And just trusting the community you are in and believing in everyone you’re working with.”

The world is changing and we want to change with it

NST has had many locations over the years, including the barn in Surry and The Grand, but has been located in the Blue Hill Town Hall Theater since the 2006-07 season.

Sitzabee first got involved with NST in 2017 when she moved to Blue Hill. She joined the cast of Raiten’s last production of Fiddler on the Roof. “When I moved here, I found a local theater and then the rest is history,” she said. “Bill and Elena [Bourakovsky] and I became fast friends.”

Though Sitzabee and Blackman have made changes to NST, Sitzabee said Raiten has always been supportive of the new direction. Royster also noted that Sitzabee has taken on the new leadership role “seamlessly.”

Part of NST’s leadership transition under Blackman and Sitzabee has been broadening the style of performances. For Sitzabee, this meant directing Fun Home in 2019. “It’s near and dear to my heart,” she said. The story is about a lesbian in her 40s reflecting on her childhood.

“I thought it was a little bit risky—it wasn’t the old New Surry Theatre. You know, it wasn’t like a classic Broadway kind of show. It was a little edgy in the sense that it was predominantly gay, and traumatic relationships,” she said. “I was anxious about how audiences would take it.”

It turned out that the cast and the audience loved it, selling out six of seven performances. “People came from far and wide. And they were gay and straight,” she said. “People resonated with the family dynamics. People were connecting with it in ways that I didn’t even fathom that they would. So it was very impactful.”

In the line-up for NST’s 50th season, Sitzabee has focused on a theme of “belonging,” with an aim of “creating an environment where everyone feels like they can belong.”

The last performance of the season is Head Over Heels, a Shakespearean parody set to the hits of the Go-Gos. Sitzabee chose the play because it is “beautifully written” and has characters who “challenge heteronormative thinking.”

Challenging traditional ways of thinking is important to Sizabee. She said, actors have been “excited” about the new material. “They have to think about the characters and what their truth is and how to present that to an audience. The world is changing, and we want to change with it,” she said.

Sitzabee noted that much of the Head Over Heels cast is new to NST. One of these actors is the Rev. Lisa Durkee, the minister at First Congregational Church in Blue Hill. She is playing one of the major roles, Queen Gynecia.

Durkee is comfortable in front of a crowd, having performed with rock bands for years and working as a pastor, but she hadn’t acted since high school. Then, her friend Sally Mills encouraged her to try out. “She said, Lisa, they’re doing a play that has the music of the Go-Gos. You have to audition,” she said.

Though Durkee was surprised to get a prominent role, she really connected with the script.

“It affirms a lot of the things that our church particularly affirms, which is the value of every person, no matter their gender identity, no matter their sexual preference. And this show does that in spades,” she said.

Despite this being her first NST show, Durkee already feels connected to the community.

“I only met these folks a month and a half ago, but we’re having a ball. It’s a fun, fun show. And there’s a lot of mutual support. You know, there’s not been a bad feeling or moment in any of the rehearsals. It’s all just been mutually encouraging,” Durkee said.

As artistic director, Sitzabee plans to continue NST’s legacy of belonging, community, and truth that Raiten started. Kinship is a huge part of the NST’s long-lasting success.

“The best part about being involved with New Surry Theatre is the sense of family. And that it extends well beyond being in a production. It’s the board, it’s our patrons, crew members, like everybody involved. There’s definitely a warm, fuzzy feeling,” Sitzabee said.

She estimates that NST serves around 3,000 people a year. Her dream is to expand the educational element and have NST become even more of a “destination” as a “robust performing arts school.” Her vision, it seems, is the more people that get involved with NST, the more lives can be changed.

Ellsworth said this was true for him. “The New Surry Theatre became this sort of family and community in a cool way. And they just really cared for me and would give me these opportunities and challenges,” he said. “Just like adding the arts and performance to your life, it helps me feel more alive to have that in my life.” 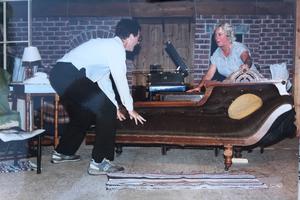 Carl Karush and Dindy Royster. Royster plays the lead role of Amanda in The Glass Menagerie in 1988. 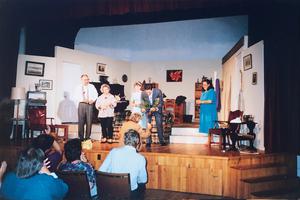 The cast of Who’s Afraid of Virginia Woolf? receives flowers from the audience. 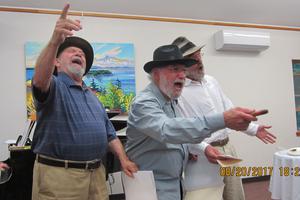 Sheldon Bisberg, Bill Raiten and Douglass Coffin do a skit from Guys & Dolls.