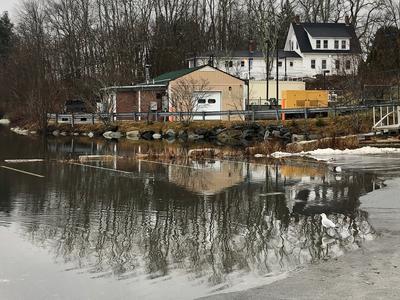 Over the New Year’s weekend, a high tide event caused outflow problems at the Blue Hill wastewater treatment facility, according to comments made during the January 3 select board meeting.

“It happens every time there is a king tide, which is more often these days,” Shawna Ambrose, town administrator, explained. “It prevents the chlorine processor from doing its job efficiently, which puts extra demand on already outdated equipment.”

King tides, the common name for “perigean spring tides,” according to the Gulf of Maine website, occur when the moon’s orbit brings it closest to the Earth. High and low tides are caused by the gravitational effects of the moon and the sun. While not part of climate change, scientists predict that by 2060, king tides could occur every month as a result of rises in sea levels energized by climate change.

“The [wastewater treatment plant] is a very important piece of the infrastructure and it would be detrimental to the town if any of it was lost due to rising tides or overall nonfunctionality of the equipment,” Ambrose said. “Mr. [William] Olver did say in the meeting that Olver Associates would assist the Town of Blue Hill in the search for grant funding. In addition to grants, the town is looking at borrowing to fund a portion of the project.”

During the meeting, the board discussed the Olver Associates report detailing needed repairs and improvements at the facility. The 36-page report, released in August, recommends immediate, short-term and long-term capital improvements for the next 20 years.

The report estimates that it will cost about $3.5 million to address immediate needs at the plant, which first went into operation in 1975. The estimated cost of implementing all of the immediate, short-term and long-term improvements could reach $40 million, Olver stated in the report.

During the plant’s first 25 years of operation, it was plagued by “major process deficiencies and frequent license violations.” The report notes that, in 2000, the plant was upgraded and has operated fairly well since that time.

The challenge facing the select board is to create a long-term capital improvement budget to address immediate and long-term goals. Board member Scott Miller asked Olver where a new treatment facility could be built if the existing plant has to be relocated due to sea level rise.

Olver responded that the current site has “plenty of room to move it up” to a higher location. He added that the select board should focus on addressing the needs of the plant for the next five years.

Board chair Ellen Best suggested that addressing the first two lists of immediate needs makes the most sense in terms of budgetary planning. The board agreed to revisit the issue at future meetings to see if additional federal, state or other forms of funding for wastewater treatment facilities become available.

In other business, the board announced that its new code enforcement officer, Martin Conant, a Stonington resident, started work on January 4. Ambrose said that Conant “has had decades of experience in Ohio and Florida.” Late last year, Judy Jenkins, who served as code enforcement officer for the town, submitted her resignation.

“He will be working part-time for the Town,” Ambrose said. “His office hours will be Monday and Tuesday, 8 a.m. to 4 p.m., and Wednesday, 8 a.m. to 5:30 p.m. We are excited for him to start, and I think he will be a great addition to the town. His first day will be spent on-boarding with the staff and getting acquainted with his new space.”

“We have advertised for the position both through The Packet as well as our website,” Ambrose said. “We do have one applicant that the select board will be meeting with during an executive session on Thursday [January 6].”

Ambrose said that anyone interested in the position of road commissioner is welcome to contact the office to apply for the job. The deadline for the select board to make a decision is January 31.

Miller announced that there are two or three openings on the town’s broadband committee.