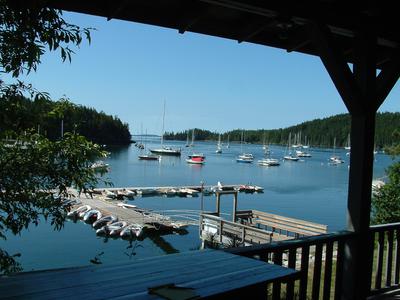 A view of Buck’s Harbor from the yacht club porch.

Jonathan Buck of Hampden, owner of Buck’s Harbor Marina, has filed a civil action in Hancock County Superior Court to prevent the town from punishing Buck for failing to comply with the Harbor Ordinance and a consent agreement.

The action was filed on January 6, 2022, in Portland by attorneys for Preti, Flaherty, Beliveau and Pachios.

The disagreement between the town, meaning the harbormaster, Debrae Bishop, and the Harbor Committee, and Buck stems from an incident on August 4, 2020, when a 100-foot-plus vessel dragged a mooring suitable only for a much smaller boat and damaged other boats and a dock, according to Bishop.

Following that incident, the harbormaster found inconsistencies among many of the moorings at the marina and sought to enforce the Harbor Ordinance, she said.

The marina and the town entered into a consent agreement to resolve the issue on September 29, 2020, according to the Notice of Decision and Order issued by the Harbor Committee in November 2021. A consent agreement is a legally binding contract between a private party and an administrative unit responsible for enforcement.

When asked for comment, Buck referred The Packet to his lawyer, Severin Beliveau, a partner at PretiFlaherty.

Buck was given until July 1, 2021, to comply with the terms of the consent agreement. On July 29, the harbormaster advised the marina of persistent multiple violations of the ordinance and the consent agreement, including repeated placement of oversized vessels on rental moorings and failure to mark 25 moorings with the maximum approved vessel size.

The harbormaster and the marina exchanged a “series of communications” prior to the harbormaster’s decision, according to the November 16, 2021, Notice of Decision and Order.

Buck and the marina appealed the harbormaster’s decision to enforce the ordinance and the consent agreement to the Harbor Committee.

The Harbor Committee convened on October 21, 2021, to hear Buck’s appeal. Both Bishop and Buck were represented by attorneys at the hearing, and multiple exhibits were entered into evidence, including photographs, the consent agreement, mooring standards and inspection reports.

The town clerk has retained a recording of the meeting. The town was also represented by the town’s attorney, Patrick Lyons of Eaton Peabody.

At the meeting, the Harbor Committee denied Buck’s appeal, effectively upholding the judgment of the harbormaster and clearing the way for enforcement by Harbormaster Bishop.

One of Buck’s main arguments was that he was being held to a more stringent standard than others when it came to moorings. The town’s Harbor Ordinance uses the phrase “commonly accepted marine practices” to describe mooring characteristics.

According to Bishop, the consent agreement supplemented that language with the Hamilton Marine mooring standards, which provide objective information such as appropriate chain size and weight.

Buck appealed the Harbor Committee’s decision, leading to the public hearing on November 16, 2021.

At the hearing, Buck contended that not only is he being held to a different standard than others but also that the harbormaster made false accusations against him, essentially defaming him. (To defame is to harm someone’s reputation by making false statements.) He further contended that Bishop’s enforcement decisions were motivated by animus toward him.

The committee voted unanimously on 11 of 13 motions brought to vote at the hearing and voted 5-1 on the two others. All votes favored the harbormaster.

Following the decision of the Harbor Committee, Lyons, the town’s attorney, notified Buck that the town would go to Maine District Court to enforce the decisions of the harbormaster and the Harbor Committee. Lyons also gave Buck the option of complying with the ordinance and consent agreement by December 31, 2021, to avoid litigation in an “offer of settlement in lieu of enforcement action.”

In the letter, the attorney laid out specific actions that would be required to meet the consent agreement, including marking mooring balls and pennants, replacing chain, engaging third party inspectors, and paying the town $30,000 in attorney fees.

If the marina fails to meet its obligations, the town will move to collect $125,000 in penalties because each of the 25 unmarked moorings has reached a maximum $5,000 penalty under the ordinance and consent agreement, attorney Lyons wrote to Buck on November 23, 2021.

Buck and the marina responded by filing an action in Superior Court on January 6, 2022, to stop the town from enforcing its ordinance and has hired PretiFlaherty to do it.

In that court filing, Buck and his lawyers make numerous arguments, among them that several of the Harbor Committee members have conflicts of interest in this matter.

Patrick Ryan, Bob Vaughn, Frank Peasley and Donald Condon all should have recused themselves from the hearing due to conflicts of interest, the complaint implies. Mark Shaughnessy and Robert Fisher are the other members of the Harbor Committee.

The complaint says that “three of those Committee members are direct economic competitors of the Marina’s business and stood to gain from a finding that the Marina was in violation of the Ordinance.” The fourth, Condon, says the complaint, reneged on a real estate deal with Buck and therefore is biased.

The complaint further questions the constitutionality of the arrangement and practices of the harbormaster and Harbor Committee. It says, “commingling of the advisory function with the investigatory and prosecutorial functions can rise to the level of a constitutional violation,” meaning that the harbormaster cannot be both an advisor to the Harbor Committee and enforce the rules.

The complaint also alleges that the harbormaster and Harbor Committee improperly communicated with each other without Buck or a representative of the marina present.

Other issues hinge on the technical wording of some documents and that the town’s selectmen were not party to the consent agreement. All of these factors combined to prevent Buck and the marina from getting a fair hearing, the lawyers contend.

In addition, the complaint alleges that the marina never agreed to label moorings with new, reduced sizes and that the harbormaster cannot unilaterally reduce the maximum size of the vessel permitted on a mooring, as Bishop did.

Bishop contends that in August 2020, with a tropical storm looming, she warned both the marina and the crew of the 100-foot-plus vessel that the mooring they were tied to was inadequate. Nevertheless, the accident occurred. No one was hurt.

Following that incident, Bishop looked more closely at the moorings of the marina and found violations. The consent agreement was put in place to avoid contentious enforcement, she said, but it did not specify consequences. Only the ordinance spells out penalties.

“The whole thing is relatively minor. It should never have gotten to this point,” said Harbormaster Bishop.