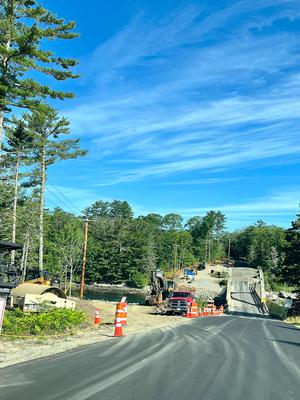 Work on the Blue Hill Falls Bridge is well underway, with a temporary bridge slated to be in place and operable by late September or early October. “In the past couple of months, the contractor has cleared both the north and south side of the bridge where they will be installing a prefabricated, temporary bridge,” said Andrew Lathe, project manager of Maine Department of Transportation’s bridge program.

Lathe indicated that the temporary bridge, which will be on the Salt Pond side of Route 175, will be able to support all legal loads as the permanent bridge is being installed (see rendering for a visual idea of what the bridge will look like). “Though the state’s detour route will be on Route 172, in anticipation of additional traffic, they have also done some rehabilitation work to improve Hales Hill Road,” said Lathe of the road connecting routes 172 and 175 that is shared between Brooklin and Sedgwick.

In terms of the project timeline, demolition to the existing Falls Bridge will begin in mid-October or early November. Lathe confirmed that the work being done now involves installing temporary stonework supports so that the bridge doesn’t simply collapse into the water/land below once the demolition begins.

The interim bridge will be in place until November 2023, at which point the new bridge will be traffic-ready. Lathe said that they will reevaluate the bridge condition after a full winter of use in 2023/2024 and make any necessary repairs or adjustments in the spring of 2024. The project contractually needs to be completed by June 28, 2024.

As far as Blue Hill’s town involvement, “The town doesn’t really have much to do with this project. It’s a federally funded MDOT project. The work of the Bridge Advisory Committee is over at this point and that was just what the name implies—advisory without actual power to direct the work of MDOT,” said Blue Hill Select Board Chair Ellen Best, in an email.