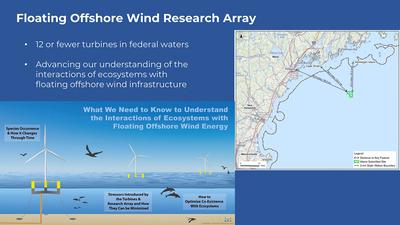 “Wind is coming,” says Carl Wilson, chief scientist of Maine’s Department of Marine Resources. The impending arrival of offshore wind turbines in the Gulf of Maine is top of mind among those working in U.S. and Canadian fisheries. It was also the subject of a recent Maine Center for Coastal Fisheries (MCCF) Lunch and Learn discussion where Wilson was speaking as a panelist. The public event, titled “Offshore Wind Energy in the Gulf of Maine: Developing a Roadmap to the Future,” took place on March 25. Paul Anderson, MCCF’s executive director, moderated the discussion. A recording of the event is available on the MCCF website.

Offshore wind technology is developing rapidly across the United States and the world, according to Ethan Tremblay of the Governor’s Office, another panelist at the lunch and learn discussion. To prepare for its arrival in Maine, the Governor’s Energy Office is leading an advisory committee with four working groups—renewable energy markets and strategies, fisheries, the environment and wildlife, and a “catch-all” group covering supply chains, workforce, ports and marine transportation.

The working groups recently completed recommendations to ease the transition to wind.

They’re calling these recommendations a roadmap. This is the first draft. Now they’re seeking feedback from experts, interested parties and the public. “It is an open and public process that prioritizes participation,” said Tremblay.

The committee plans for two more rounds of recommendation refinements based on comments and additional research before finalizing the roadmap by the end of the year. The U.S. Economic Development Administration funded the planning process with a grant worth over $2 million.

In the meantime, several offshore wind projects are in the works. The first, a pilot project, is a single floating offshore turbine south of Monhegan Island. Led by the University of Maine’s research program and New England Aqua Ventus, the project is funded by the U.S. Department of Energy and may be the first floating offshore wind turbine in the United States. Anderson believes it’s on track for placement in 2024.

The second project is a floating offshore wind energy research array. The state applied for a federal lease with the Bureau of Ocean Energy Management (BOEN) on October 1, 2021, to place up to 12 turbines in federal waters 24 miles south of Monhegan Island and 45 miles southeast of Portland. “The idea of this research array is to help us understand what we need to know about the interactions of ecosystems with floating offshore wind energy,” says Tremblay

More developments are likely. “BOEN [Bureau of Ocean Energy Management] has identified it [the Gulf of Maine] as an area where they will be identifying potential wind areas in 2023 and anticipating lease sales in 2024,” says Tremblay.

Tremblay serves on the energy markets and strategies working group. Before presenting their recommendations, he explained why the state is turning to wind energy to begin with.

To avert the worst effects of climate change, Maine passed a law in 2019 that 80 percent of the state’s energy portfolio will be renewable by 2030, and 100 percent by 2050. Today, renewable energy sources like landfill gas, wind and grid-scale solar make up just 9 percent of New England’s energy needs. Hydropower, which the six New England states do not consider to be renewable, makes up another 7 percent. Natural gas makes up 40 percent and nuclear power 25 percent, according to ISO New England.

“We are over-dependent on natural gas to generate our electricity,” says Tremblay. Natural gas is a significant source of greenhouse gas emissions and is subject to price volatility due to supply chain challenges and factors like global instability. “This is the single largest driver of recent electricity price increases in the state,” Tremblay says.

To reduce emissions and price volatility, the state seeks to increase “beneficial electrification,” Tremblay says. This includes moving from fossil fuel-burning engines, boilers and furnaces to vehicles and heat pumps that run on electricity. As a result, electricity demand is expected to more than double by 2050 according to a model commissioned by the Maine Climate Council.

To bridge the gap while meeting climate goals, the state will need a sizable investment in renewables. Wind is one of them. Maine won’t be alone. “The federal government has set a goal of deploying 30 gigawatts of offshore wind by 2030 to create nearly 80,000 jobs,” says Tremblay. The U.S. DOE claims that is enough to power over 10 million homes.

After Anderson and Tremblay explained where Maine stands with offshore wind energy, representatives from each of the four working groups summarized their recommendations.

The energy markets and strategies working group conducted a market analysis. Its findings? “The New England region is going to need offshore wind, and it’s going to need offshore wind in the Gulf of Maine in order to meet other states’ renewable energy goals as well as Maine’s,” says Tremblay. As a result, the group’s first recommendation is that Maine set a target number of turbines to build and start building them. “It should involve a binding commitment from the state to signal our intent to pursue offshore wind,” says Tremblay.

The group’s second recommendation is to make building the turbines as cost-effective as possible. “Floating offshore wind is expected to drop in price by about 80 percent in the coming decades,” Tremblay says. The group hopes to strategically use policies and programs to speed those price reductions. The third recommendation is to work closely with other New England states to, for example, lower costs and develop the necessary workforce.

Wilson, who is also a board member of MCCF, began the fisheries working group presentation with a statement. “Maine fishing still matters,” he says. “We have over 10,000 commercial harvesters. And their activities, as measured by our landings program through the number of trips in a single year, represent about 30 percent of all fishing trips on the eastern seaboard of the United States.”

Maine has a long history of co-managing fisheries, balancing power between industry, communities and governance. “This is not co-managment of fisheries. This is a very different process,” says Wilson. “Everyone’s kind of learning to adjust to that and find areas where input can be gathered. And so this fisheries working group is one of these areas.” It includes fishermen, scientists, policy-makers and members of the public.

The fisheries working group recommendation hightlights include developing clear lines of communication between the wind and fishing industries and actively encouraging engagement. That includes data sharing. They also recommend working with BOEM and other states to establish physical and biological monitoring requirements for wind developers and to seek funds to support it.

The working group urges an all-hands-on-deck effort to pool data and expertise from fishermen, scientists and other experts in fisheries, wildlife and the environment to map high-priority habitats and fishing grounds. They want to minimize harm to Maine’s fisheries when mapping out wind energy lease areas.

Wing Goodale, senior science director at Biodiversity Research Institute, outlines recommendations for the environment and wildlife. The first echos the request of the fisheries group, to map high-priority wildlife areas using existing data and expertise so that they know where wind turbines shouldn’t go. Early data indicates that the two priorities will overlap.

“One thing that was really interesting during the sighting of the research array was that DMR and BRI did separate processes looking at areas of greatest conflict from a fisheries and wildlife perspective. And when those two were brought together, we came up with almost the same exact areas to avoid conflicts as much as possible,” says Goodale.

Other recommendations include collecting habitat data and environmental baseline data in the Gulf of Maine, to understand the “baseline” data of the ecosystem before wind turbines arrive. Otherwise, it’s hard to understand what they are changing. They also want to launch studies to track rare and vulnerable species to understand how they are affected. For example, a 2019 study published in the Journal of Environmental Management found that offshore wind farms decreased loon habitat in Germany.

Goodale did not mention any special considerations for whale populations. Since Maine’s lobster fishery is coping with the phasing in of new regulations to protect right whales, we contacted him for more information. He directed the question to the Maine Department of Marine Resources. According to Jeff Nichols, communications director at the DMR, the department already has sound traps at the future site of the research array and plans to deploy more.

The traps are collecting information on noise levels and marine mammal presence prior to the research array’s placement and will remain in place as it is built. The DMR will then compare pre-turbine data with that collected during and after construction. “This passive acoustic monitoring of ambient noise and site usage will be coupled with other surveys for marine mammals, as well as potential impacts on habitat through oceanographic and prey field sampling,” Nichols wrote in an email. In short, they will do their best to see how the whales react.

“This working group…is focused on supply chain, workforce development, and ports and marine transportation,” says Josh Rosen, offshore wind consultant to Maine International Trade Center (MITC). “Given that we know this industry will soon be coming to Maine and is growing very rapidly, just to our south, what are the ways that we can ensure that benefits from this industry are maximized to Maine firms and Maine people?”

Rosen had a lot to cover. Highlights include strengthening workforce education and encouraging high-quality jobs, moving quickly to develop the port infrastructure needed for offshore wind. “Our estimate suggests that Maine needs to add about 75,000 new workers to support this industry,” says Rosen. “Maine has a real opportunity to engage in this with its ports to grow our port facilities and the associated economies to really meet the occasion and compete with other states.”

Find the full text of the working groups’ recommendations at maineoffshorewind.org/working-group-recommendations. A recording of the discussion is available under Collaborative Education on the MCCF website at coastalfisheries.org. The working groups are seeking public comment through April. 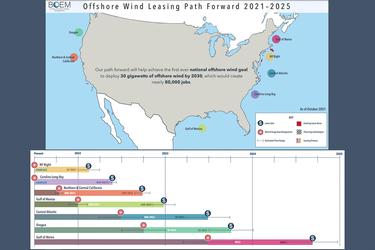 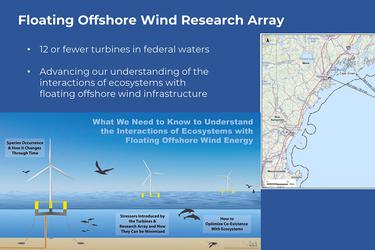 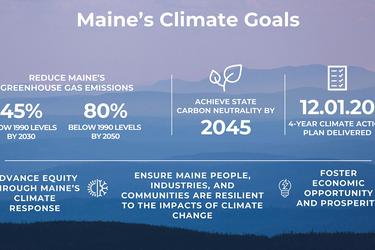 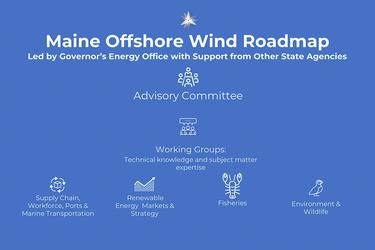