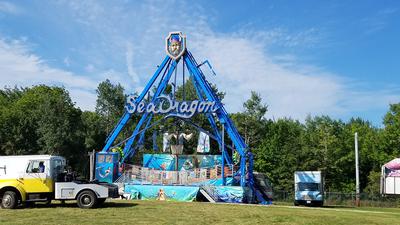 The Sea Dragon sits ready along the midway.

Cash is still king at the Blue Hill Fair, which runs September 2 through 6, according to Erik Fitch, fair manager.

In an August 30 interview at the Blue Hill Fairgrounds, Fitch said there has been some confusion surrounding the introduction of “Magic Money” kiosk machines, a digital ticketing system similar to a standard ATM that will dispense a refillable card to be used for rides and midway games that replaces paper tickets. Cash, debit and credit cards can still be used at food and merchandise vendors.

Cushing Amusements is responsible for the introduction of the Magic Money machines. A Wilmington, Mass. company, Cushing replaced Smokey’s, which provided rides and games for many years, Fitch said. Cushing provides amusements for fairs, carnivals, fundraisers and other events throughout New England. The machines will be available throughout the fairgrounds. Those who are digitally savvy can download a Magic Money app for Androids and iPhones in advance.

“To clarify, Magic Money cards are used only for rides and games, instead of paper tickets,” Fitch said. “All you do is put money into the machine and it spits out a plastic, refillable card. The cards will be scanned by the ride and game operators. Cash ATM machines are also available at the gates to the fairgrounds.”

With the COVID-19 Delta variant causing a surge of new infections across the state, the digital ticketing system will reduce personal contact. Fair officials also purchased 30 new hand sanitizer machines, which were deployed to various locations around the grounds.

In response to the continuing battle against COVID-19, Northern Light Blue Hill Hospital, along with Northern Light Home Care and Hospice, is offering free Pfizer and Johnson & Johnson vaccinations to fairgoers, from 1 to 4 p.m., Friday, September 3 through Monday, September 6, according to Dr. Mike Murnik, hospital vice president and senior physician executive. The vaccination tent is located within the track area of the Grandstand Stage. No appointment is necessary.

“Getting vaccinated against COVID-19 is the single most effective way to protect you and your family against this disease,” Murnik said. “We urge anyone who has not yet been vaccinated to do so.”

While this year’s fair hosts familiar activities for young and old, it also marks the debut of a collection of old things in the new Blue Hill Fair Museum, Fitch said. Located in the craft building, near the fairground office, the museum features fliers, posters, newspaper and magazine articles and photos signed by featured musical entertainers and others throughout the fair’s long history.

The first Blue Hill Fair was held in October 1891 in a field located behind Hammond Lumber, Fitch said. The museum features a document issued by the Hancock County Agricultural Society, as well as a receipt dated October 27, 1891. In 1892, the agricultural society purchased the land which serves as home to the iconic country fair.

“We had a lot of donations—people who dropped stuff off,” Fitch said. “People said, ‘I had this in my attic,’ or [it came] ‘from my basement.’ They just want to be able to showcase it and say, ‘Hey, I donated this to them.’ It’s really something for the Blue Hill Peninsula community, who have huge family ties to the fair. There’s a lot of old names that they know—the old Joey Chitwood shows, and we have a lot of photos autographed by the artists.”

Fans of the late E.B. White, a Brooklin resident and the author of Charlotte’s Web, may know that he was so taken by the fair’s atmosphere that he used it as the dramatic setting for the climax of his children’s classic: “When they pulled into the Fair Grounds, they could hear music and see the Ferris wheel turning in the sky…They could hear sheep blatting in their pens.”

Pointing to a white, wood-panel placard at the museum, with a hand-lettered list of admission prices, Fitch said, “In 1908, it cost 50 cents to get into the fair, and then 25 cents for the shows at night.”

Also on display are signed, limited-edition prints of East Blue Hill resident Megan Granger’s yearly fair prints, which she began painting back in 2006, Fitch said. “They have become collectors’ items. A lot of people have tried to get all 16…Everybody wants the very first one because it was the 50th anniversary of the sheep dog trials…some people have emailed saying they’re willing to pay $300 to $400, if one can be found.”

This year, from the Fire Show, which features the Guinness World Record holder for eating the most fire in one minute, to a Sunday night performance by comedian Bob Marley and the newly created Blue Hill Fair Museum, the 2021 Blue Hill Fair provides a wide range of sights, sounds, aromas and memorabilia for everyone.

For more information, pick up the Blue Hill Fair Handbook published by Penobscot Bay Press at the fair or in town or visit bluehillfair.com/schedule.php. 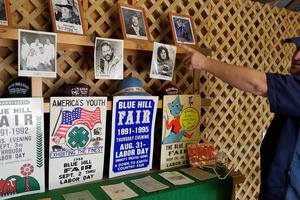 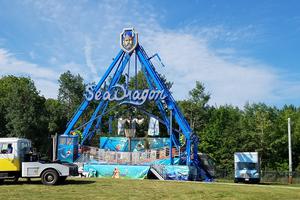 The Sea Dragon sits ready along the midway.