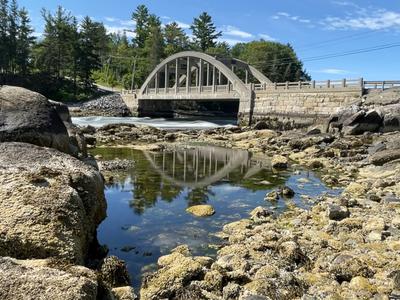 Bids for the replacement of the Falls Bridge, located on Falls Bridge Road, Route 175, are scheduled to go out on October 13, according to Paul Merrill, the public information officer for the Maine Department of Transportation.

Construction of the estimated $10.5 million replacement bridge is scheduled to begin in the early spring of 2022 and is expected to continue through the spring of 2024, Merrill explained in an August 24 email to the The Packet. He added that as the project moves forward, construction schedules and related information will be updated as needed.

The concrete bridge, officially named the Stevens Bridge when built in 1926, is one of two historic rainbow arch bridges remaining in Maine, according to historicbridges.org. The 114-foot bridge spans the Salt Pond tidal basin.

“During our last Falls Bridge Advisory Committee meeting, we discussed salvaging the bronze plaque on the bridge, and there was mention of removing the four existing finials,” Merrill said. “Mr. [Scott] Miller, [Blue Hill select board], asked if the town could request other items for salvage, and I indicated that the timeline was short because the contract documents need to be complete by September 15th.”

At the August 16 Blue Hill select board meeting, Miller noted that the bronze plaques—the one on the south entrance to the bridge is inscribed with the 1926 construction date, and the north entrance plaque carries the Stevens Bridge inscription—are scheduled to be salvaged. In addition, four concrete finials, each weighing about 200 pounds, will be salvaged during the demolition phase of the project. Miller explained that federal regulations require that archival photographs of the existing bridge must be taken to document the project.

“I informed Mr. Miller in a follow-up e-mail that if the municipality had additional salvage requests, we would need to know by September 8th,” Merrill said. “Since this is a concrete structure, demolition may limit or prohibit salvage with an emphasis being placed on the safe removal of the bridge. Salvageable items will be left within the project limits for the municipality to pick up.”

Miller told the board that the bridge advisory committee discussed a plan for the construction of a temporary one-lane bridge that could be used to divert traffic for 10 to 24 months, while the new bridge is being constructed. The current design specifications of the bridge are “basically as it was,” with two 11-foot wide lanes.

“There is one maintenance of traffic plan, and that is the installation of a temporary bridge on the Salt Pond side,” Merrill said. “The temporary bridge will be single-lane, alternating one-way traffic controlled by temporary traffic signals.”

For more information on the Falls Bridge Project, visit townofbluehillmaine.org/falls-bridge-project.