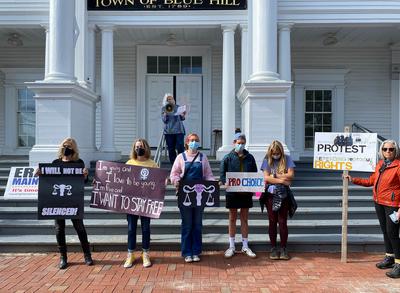 About 60 people demonstrate for abortion rights during an October 2 rally in Blue Hill.

About 60 people participated in the 2021 Women’s March, held in Blue Hill October 2, to protest against the recently passed Texas law that bans abortions after six weeks, according to Nancy Murdock of Equal Rights Maine.

Murdock said the Blue Hill event was one of 12 held in the state. There “were 600 protests organized across the country,” she said, noting that Posie Cowan and Nina Milliken worked with George Stevens Academy to organize the event.

“My former mentor and colleague, Morgan Lowe, teaches an Introduction to Modern Feminism course at GSA,” Milliken said. “I approached Ms. Lowe and her students and asked if they’d help plan the protest with me and I felt as though the protest was a great success thanks to their assistance, as well as Posie’s. We had a wonderful turnout.”

“I want to thank the local students for organizing this Rally for Abortion Justice,” Cowan said at the rally. “Reproductive rights are women’s rights. Today women and girls and their allies are marching and rallying in [Washington] D.C., and in every state. We are here in Blue Hill to send an unmistakable message: We are fiercely opposed to restricting abortion access and we are fiercely opposed to the Supreme Court overturning Roe v. Wade.”