Brooksville
Originally published in The Weekly Packet, October 14, 2021
Brooksville has a new spot to learn about watersheds and fish passage 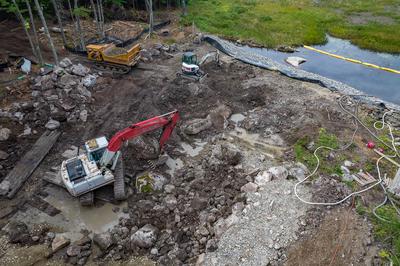 The last piece of equipment has left and a brand new trail is ready for walkers on land owned by Blue Hill Heritage Trust at Meadow Brook, off Coastal Road in Brooksville, according to a press release. At the end of the roughly 800-foot trail are a big piece of granite to sit on, signs to learn from, and, more important for fish and other wildlife, a newly installed nature-like fishway.

The project installed a new section of streambed using local stone designed and engineered to keep water levels upstream as they are, but also allow for water and fish to travel over and through a so-called “rock ramp” section of the streambed. Linkel Construction of Topsham did a careful job with an eye to detail, following plans by project engineer Joe McLean of Acadia Civil Works, according to the release.

“This project is a work of art, and should restore fish passage to this entire wetland complex. A number of years of work have gone into this, and it is so exciting to have it now completed,” noted Senior Project Manager Ciona Ulbrich of Maine Coast Heritage Trust. MCHT held the construction contract, was the permit applicant and raised the funds for the project.

“Important to add,” said Ulbrich, “is that this project could not have been done without the support and actual permission of not only Blue Hill Heritage Trust, as landowner, but three other neighboring landowners whose land was part of the project.”

“The restoration of historic alewife runs in the Bagaduce watershed, in just five years, is an inspirational story for conservation in Maine. The work of Maine Coast Heritage Trust and the Three Town Alewife Committee on these projects has been phenomenal, and Blue Hill Heritage Trust has been honored to play a supporting role in bringing these ecologically and culturally important fish back to the streams they have travelled for thousands of years. We can’t wait for next spring to see them making their way up the rock ramp into Parker Pond,” said Hans Carlson, executive director of Blue Hill Heritage Trust, according to the release.

Deb and Bruce Staples own land that was part of the project. They noted: “Our property, purchased by Norman and Inez, has been in the Staples family for well over a century. It has been handed down through generations, so the land and the Town are very special to our family. We are happy to have been a part of the restoration.”

“This really was an incredible project to watch unfold. MCHT and multiple agencies and partners brought incredible resources to the table, while ensuring that local knowledge and values dictated the goals of the work and how it got done. This is truly how this important work should be done, and I was happy to play a role in that” said Mike Thalhauser, collaborative management specialist with Maine Center for Coastal Fisheries, a key partner organization throughout the project.

“This project is critical in the effort to restore sea-run fish in the Bagaduce river watershed and reconnects alewife to a hugely diverse wetland and pond complex that will ensure the ecological integrity to Bagaduce river far into the future,” said Ben Matthews, watershed restoration scientist with The Nature Conservancy in Maine, a funder and partner organization for the project.

Multiple streams and small water bodies feed into Meadow Brook, which in turn flows into the Bagaduce River not far upstream of Bagaduce Falls. Historical records indicate that a mill that milled shingles and staves ran seasonally, starting in about 1767, and was called Parker’s Mill or Parker’s Privilege. It was run by a few owners over time and was tallied among Brooksville’s water powers until around 1900, when it was closed. A structure to control the water flow of the stream remained in place until the 1950s. When that structure washed out, the stream channel was changed, and alewife and other fish that once ran up the brook every spring could no longer make it up.

The project is one of the priorities identified by the Peninsula’s Three Town Alewife Committee, working with a set of partner organizations and agencies on restoring fish passage throughout the watershed, including the Maine Center for Coastal Fisheries, Maine Coast Heritage Trust and The Nature Conservancy of Maine. 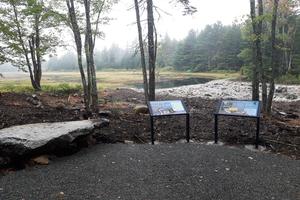 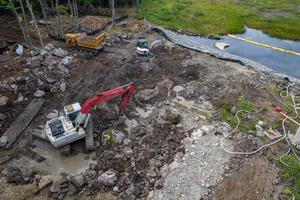