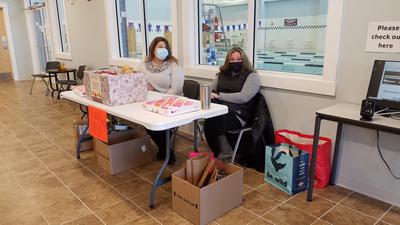 “We had an amazing turnout for it being our first year,” Ambrose said. “We collected 23 turkeys and several boxes of food. I can only imagine next year will be even better. The Odd Fellows donated 150 pounds of potatoes, as well.”

This was the first year that the town sponsored the Thanksgiving food drive. Ambrose, along with Lyndsey Dow, town clerk, manned a table inside the Lawrence Family Fitness Center from 10 a.m. to 6 p.m. on November 17, collecting turkeys, nonperishable items and cash donations that were later transferred to the Island Food Pantry in Stonington, since the food pantry in Blue Hill does not have adequate refrigeration space to store the turkeys. On the day of the food drive, the turkeys were stored in refrigeration units at TradeWinds Market Place.

In addition to donating the use of the cold storage space, Chuck and Belinda Lawrence, owners of TradeWinds, were also collecting food and cash to be distributed to area families and residents for the holidays.