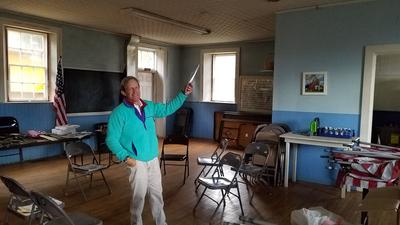 Butler Smythe points to the tin ceiling that will be removed as part of the restoration of the American Legion building located on Tenney Hill Road.

As weather permits, masons from Alpha Omega Masonry, a Bangor-based company, working from a lift platform, are renewing the pointing on weathered bricks on the front exterior of the Blue Hill American Legion Duffy-Wescott Post #85.

“Mainely Vinyl (based in Trenton) did our windows and they will probably finish the windows,” said Butler Smythe, post finance officer and adjutant, during a November 19 walk-through interview of the 1833 building located at 13 Tenney Hill Road. “They did the roof, too.”

Prior to the current brick work on the front and left side of the building, the 30-year-old roof and the front windows were replaced, Smythe said. The brickwork alone will cost more than $130,000. To address all of the restoration and repair work on the building, which occupies the site of an circa-1803 wood-frame school building, will cost between $500,000 and $600,000, he added.

The building does not qualify under its 501(c)19 nonprofit status for Historic Preservation funds, which are reserved for nonprofits organized under 501(c)(3) status, Smythe said. He added that the national American Legion organization does not fund construction or restoration of buildings used as Post chapters.

“The intent is not to preserve the structure of the building, but modernize it,” Smythe said. “That is going to be, basically, gutting the inside, taking all of the tin off of the ceilings and walls. The tin has very little space between it and the brick wall. We haven’t had an architect come in yet, but this is kind of what we’ve been talking about doing. At some point, we’ll get an architect to go through and suggest ideas.”

From 1803 to 1898, the site served as the home of the Bluehill Academy. The original building was sold and moved and the current brick edifice was built in 1833, Smythe said. From 1940 until 1944, when the trustees of Bluehill Academy donated the building, at a cost of $1, to serve as the home of the newly formed Duffy-Wescott Post, it was being used by George Stevens Academy to teach extension classes.

In the early 1900s, the building went through a modification that included the addition of brick buttresses, a kitchen, bathroom and cosmetic pillars, but it was never insulated. Among other interior cosmetic concerns, the effects of a 1933 building fire are still visible—heat caused some of the tin to ripple and buck, Smythe said. Surprisingly, it wasn’t until late 2016 that a well was dug to serve the building.

“Our biggest problem right now is in the back-corner foundation and the basement…because of the water problem…expansion and contraction [have] pushed the granite blocks in (about a foot), and even one of the buttresses went that far in,” Smythe said. “That’s our biggest issue. It’s not getting the guy to do the brick; it’s not getting the guy to hold the building up; it’s finding the guy to repair the foundation. For some, it’s too small of a job, and for others it’s a bit too complex.”

Currently the post has about 24 members, Smythe said. The majority are older individuals—World War II, Korea and Vietnam veterans. He estimates there are between 200 and 300 military veterans living in the post’s coverage area who are eligible to join the American Legion.

“Previously the American Legion got rid of the limitations that you had to serve during certain war periods,” Smythe said. “That’s gone away. Pretty much anybody can join, as long as they were alive and served since 1941. We’re hoping our membership will increase.”

In addition to structural repairs and restoration, the plan is to install heat pumps on each floor to replace the current oil-furnace system that supplies heat to the entire building. Smythe said the tin will taken off the ceilings and walls to allow the building to be properly insulated. Electrical upgrades will also be required.

“We’re on the third major project, which includes replacing the front windows,” Smythe said. “The steeple has been removed, but the bell is still there and the weather vane, which we believe is the original, and the chalkboards from the school are the only other things that we know are original here.”

Smythe said the board is planning fundraising campaigns, searching for grants and considering various strategies to raise the money needed to save the historic building. Volunteers interested in contributing funds or time to the building restoration effort are asked to contact Smythe at thbsmythe@gmail.com. 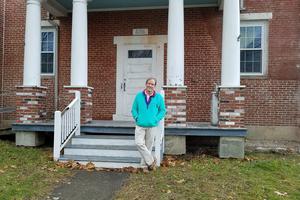 Butler Smythe stands at the entrance of the historic American Legion building, which is undergoing brick repointing as part of a comprehensive restoration effort. 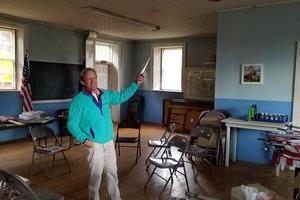 Butler Smythe points to the tin ceiling that will be removed as part of the restoration of the American Legion building located on Tenney Hill Road. 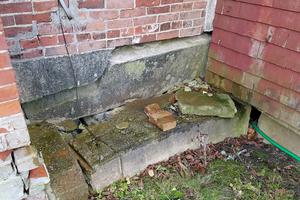 This damage to the northern rear corner of the foundation of the historic American Legion building located on Tenney Hill Road has been caused by water damage.