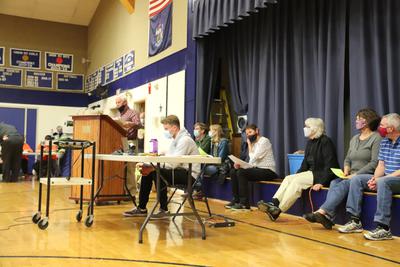 It was standing room only at Surry’s special town meeting on the evening of May 24. Residents crowded into the elementary school gymnasium to weigh in on a proposal for the town to purchase an 11.9-acre parcel of land off Newbury Neck Road that encompasses the traditional parking area for the town beach. After discussion, the article passed unanimously.

Longtime resident Ann O’Neill was surprised by how many people showed up, observing it to be the highest turnout she’d seen at a town meeting in nearly 35 years. Town officials later confirmed that it was in fact the most well attended town meeting in Surry’s history.

Voting began with the selection of Tony Beardsley as the moderator, and the discussion commenced with selectman Betsy Armstrong giving an introduction to the issue.

According to Armstrong, the entire process began in April, when the out-of-state owner, a New York resident, sought to sell the property and subsequently erected private property signs barring visitors from parking in the small lot on the inland side of Newbury Neck Road. Residents and visitors have been parking in the lot to access town beach for nearly 50 years, and, as town officials quickly realized, a private sale of the property could potentially cut off that historic access. Town officials consulted the owner and convinced him to consider giving the town a chance to purchase the property for $215,000.

“We managed to get a few weeks out of him,” said Armstrong.

The lack of an officially sanctioned public parking area at the beach has been a safety issue for years, said former selectman Bill Matlock. On nice summer days, the small parking area fills quickly with cars spilling out on the roadside, posing a hazard both to pedestrians and emergency vehicles, he pointed out. Matlock also added that the property owner denied overtures from the town to buy the parcel in previous years.

“The reason the town needs this property is to solidify and cement this parking issue once and for all,” said Matlock.

Several nearby residents also raised concerns over possible improvements to the area and resultant increases in traffic. Perry Mattson, a resident on nearby Carrying Place Lane, sought a commitment from the town that a new parking lot would not be established on their private road, which abuts the parcel.

Armstrong responded that the town has no intention of using Carrying Place Lane, and that any significant changes to the parcel would have to be negotiated with the approximately 13 other parcel owners in the subdivision. The parcel is currently not subdividable due to shoreland zoning ordinances; in the future, the town may seek to sell the property and retain an easement on a small portion, including the parking area.

“All we are trying to do is maintain the parking we have customarily used for years,” said Armstrong. 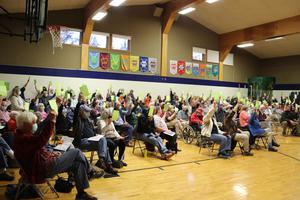 Residents vote at Surry’s May 24 special town meeting, the most well attended in the town’s history, to approve the town’s purchase of a parcel guaranteeing beach access. 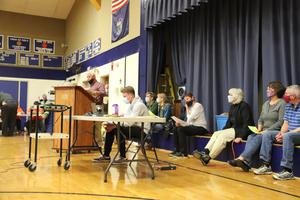