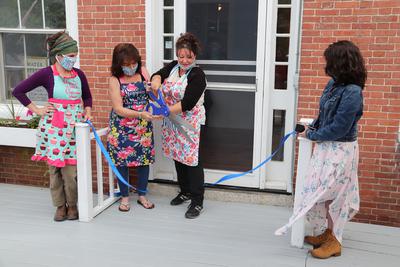 There’s good news for those looking for a new lunch spot in Blue Hill: Water Street Bistro will open its doors this summer in the historic Pendleton House on its namesake street.

A well-attended ribbon cutting ceremony on Friday, May 28, jointly sponsored by the Blue Hill Chamber of Commerce, marked the celebratory unveiling of the new restaurant. According to owner Jan Wilson, the traditional menu will focus on a rotating assortment of soups, sandwiches, quiches and salads. A cast of cupcakes and other baked items will also be on offer to satisfy sweet teeth peninsula-wide.

With its focus on lunch, and quiches in particular, Water Street Bistro assumes the role of its beloved predecessor, the Harbor House. Kathy Eaton, former owner of the Harbor House, was present at the ceremony to wish the newcomers well. Other illustrious guests included Rep. Sarah Pebworth and the owners of the Pendleton House, Peter and Sonja Leonard.

The Leonards purchased the building four and a half years ago. It also houses another ground floor business, Moyo Boutique, and six upstairs apartments.

“It’s a good group of people,” said Sonja Leonard, adding that there’s “a huge line waiting to get in.”

Leonard appreciates the historic aspect of the structure, and at one point hoped to rebuild the wrap-around porches that used to straddle the second floor in the early 20th century, only to be stymied by the town which claimed it would block the view from the street. Sonja Leonard calls this “ridiculous.”

“We need more people [who] save our history rather than tearing it down like those idiots at the hospital,” she said.

Following the ribbon cutting and introductions, Wilson invited the audience into the restaurant space to sample meatball subs, a salad and mini cupcakes. She waxed optimistic about her new restaurant.

Originally from New Jersey and with a background in criminal forensics, Wilson made the trek from Colorado Springs after a visit to Blue Hill convinced her and her husband to relocate.

“We just love Blue Hill; we’re very happy to be here,” she said.

“If we’re not serving the community, what are we doing here?” she said.