Brooklin
Originally published in The Weekly Packet, June 3, 2021
Cause of May 27 Brooklin cottage fire undetermined 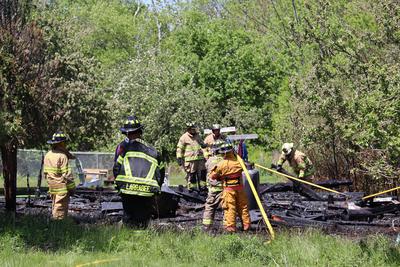 Firefighters from five towns clean up after the cottage fire in Brooklin.

Five area fire departments spent more than five hours on May 27 working to contain a blaze that destroyed a Brooklin cottage.

Brookin Fire Chief Sam Friend said on June 3 that at about 10:30 a.m. on May 27, a passerby reported a fully involved structure fire in the 500 block of Naskeag Road. When fire companies arrived on the scene, they discovered the 400-square-foot detached residence was engulfed by the blaze.

About 25 to 30 firefighters, along with seven fire trucks, from Brooklin, Blue Hill, Sedgwick, Deer Isle and Stonington, focused their efforts on keeping the fire from spreading to the woods or other structures. There were no injuries reported.

The building was a total loss, Friend said. The name of the property owner was unavailable at press time.

“The cause of the fire is undetermined at this point,” Friend said. “It’s being reviewed by the Office of the Fire Marshal.”