Brooklin
Originally published in The Weekly Packet, July 8, 2021
New benches and table dedicated to the life of James Straub 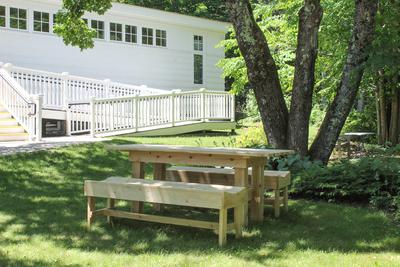 The picnic table and benches serve as a quiet work space on the library’s front lawn.

A set of two benches and a picnic table were donated to Friend Memorial Public Library in honor of James Straub on June 7. Straub was a passionate writer and journalist, and filled an impressive range of positions for both The Ellsworth American and Penobscot Bay Press papers. He worked at PBP for the past nine years as the copy editor, until his death on April 18 of this year. Jim was considered to be a rock among his colleagues and was a skilled wordsmith. A Friend Memorial Public Library patron, he loved the written language, as indicated by the plaque on both the picnic table and a bench.

“He was a pillar of the community,” said Ann Thomas, Friend Memorial Public Library Director.

Visitors to the library can find the table and benches on the outside lawn and use them at their leisure. Because the benches and table are also separated, guests can move them around in different configurations to suit their needs. According to Thomas, the benches have been used this way since their installation.

“People will pull up and do their own writing. Jim loved the written word,” said Thomas in a phone interview.

The benches and table were donated by Linda and Mike MacAdoo and were built by Patrick Garrett in Spruce Head, who specializes in cedar construction.