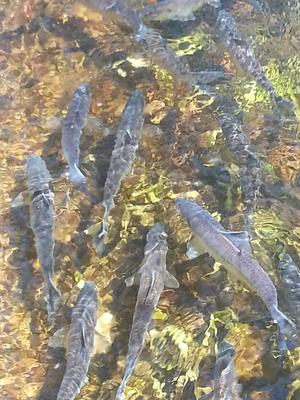 Construction is underway at the Meadow Brook site that will re-establish essential habitat for alewives in the Bagaduce River Watershed.

Construction has begun on a project aimed at restoring fish passage in the Bagaduce River Watershed. With the support of multiple landowners and funding from a number of sources, equipment is in place and a team has started work at a site on Meadow Brook, off of Bagaduce Road, according to a press release.

The project is one of the priorities identified by the Peninsula’s three-town Alewife Committee, which is working to restore fish passage throughout the watershed in partnership with Maine Center for Coastal Fisheries, Maine Coast Heritage Trust and The Nature Conservancy of Maine.

Multiple streams and small water bodies feed into Meadow Brook, which in turn flows into the Bagaduce River not far upstream of Bagaduce Falls. Historical records indicate that starting in about 1767, a mill called Parker’s Mill or Parker’s Privilege milled shingles and staves seasonally and was counted among Brooksville’s water powers until around 1900, when it was closed. A structure used to control the water flow of the stream remained in place until the 1950s. When that structure washed out, the stream channel was changed, and alewives and other fish that once ran up the brook every spring could no longer make it up.

The project will create what is called a nature-like fishway on a section of the stream, designed and engineered to keep water levels upstream as they are, but allow for water and fish to travel over and through a so-called “rock ramp” section of the streambed. Project Engineer Joe McLean of Acadia Civil Works has been working on the engineering for a couple of years, and after a public competitive bidding process, Linkel Construction of Topsham is doing the work.

For safety reasons, the site will be closed for the coming weeks until construction has been completed. The results will include a new looking section of the stream, as well as a new walking trail open to the public into the site from a parking area and some interpretive signage to tell the story. The trail and signage will be on land owned and managed by Blue Hill Heritage Trust. Local stone and materials have been used as much as possible to help the changes look natural, and time will help vegetation grow in and rocks to settle.

Once the trail is safe to walk, an announcement of its reopening will be made in late summer or early fall, and surrounding communities will be invited to come enjoy the new trail and see the work.