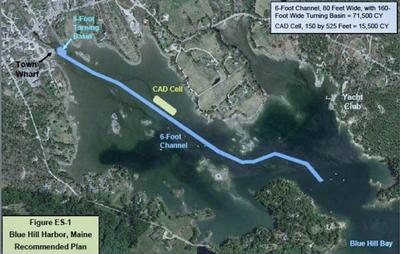 Map of the proposed dredge plan in Blue Hill Harbor.

The U. S. Army Corps of Engineers (ACOE) and the Town of Blue Hill have submitted a Navigation Improvement Project for the creation of a federal navigation channel and a Confined Aquatic Disposal (CAD) cell in Blue Hill Harbor.

The ACOE proposes the construction of an 80-foot wide channel from deep water to the town landing including a half acre turning basin. The proposed project would dredge a 2,500 foot long Federal Channel and a 38,000 square foot turning basin near the town landing. Both the turning basin and the new channel would be dredged to depth of -6 feet at Mean Lower Low Water.

For more information about this project, contact Denis-Marc Nault at Denis-Marc.Nault@maine.gov or 592-0512.