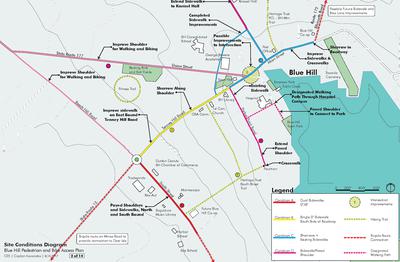 Increasing pedestrian and bicycle safety is the goal of a $500,000 South Street sidewalk construction project, which is scheduled to begin sometime in the spring or summer of 2022.

Construction of a $500,000 bicycle and pedestrian sidewalk along the west side of South Street is scheduled to begin in the spring or summer of 2022.

The deadline for the public to post comments on a Maine Department of Transportation “on-demand public meeting” website about the Blue Hill Connectivity Project ended Thursday, February 18, according to MDOT. The connectivity project, more commonly referred to as the South Street sidewalk project, originally called for sidewalks to be constructed on both sides of South Street, said John Burns, president of Blue Hill Community Development. Due to increased construction costs, the scope of the project was reduced to only one sidewalk to be built on the west side of South Street, beginning 0.04 of a mile south of Bay School Drive and extending north 0.36 of a mile, at an estimated cost of $500,000.

Burns, who considers himself one of the original instigators for the project, said the effort began in earnest, early 2017, with the formation of the Blue Hill Community Development group. In late March, about 50 people attended a public forum to discuss plans to make Blue Hill more accessible to pedestrian and bicycle traffic.

At the time, the Blue Hill Co-op had announced plans to construct a new market on South Street, across from the Bay School, which added to safety concerns for students who are forced to walk along the side of South Street, Burns said. As a result, the community development organization worked with the town to finance the project.

Burns said BHCD and the select board decided to pursue the project through a MDOT Bike and Pedestrian Program matching grant. In a February 22, 2019, grant award letter, an MDOT transportation planner informed the select board that the $400,000 federal grant was awarded to design and construct the pedestrian and bicycle safety project.

Vaughn Leach, who recently resigned from the Blue Hill Select Board but continues to serve as a liaison between the board and the sidewalk committee, said that he became involved with the connectivity project right after BHCD began. The idea was to make the entire town more accessible and safer for pedestrians and bicyclists by connecting sidewalks and trails into a connected system.

“Basically…when we started out…we did a quick but detailed overview of the whole town and mapped out where the sidewalks were,” Leach said. “We discussed places where connections would be helpful. We came up with a road map of how to structure what was missing, what was there, and some people were tossing around ideas about the trails—all part of what we call connectivity.”

He added: “A lot of people say ‘geez, why don’t they fix the Mines Road.’” Leach said the federal grant money awarded to Blue Hill can only be applied to the South Street sidewalk project. The town does not have the authority to use the funds for any other highway or road improvement projects.

“Hopefully, the town will be able to find other grant money and raise money from taxpayers to go off Union Street and connect to Beech Hill Road, for instance,” Leach said.

The $500,000 South Street sidewalk project, highlighted in orange, is part of a long-range plan jointly developed by the Blue Hill Community Development, the Blue Hill Select Board and members of the community to increase pedestrian and bicycle safety and accessibility in the community. 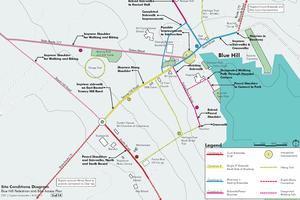 Increasing pedestrian and bicycle safety is the goal of a $500,000 South Street sidewalk construction project, which is scheduled to begin sometime in the spring or summer of 2022.