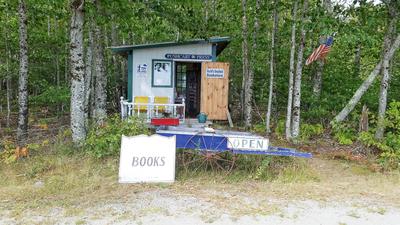 Pushcart Press & Bookstore, located on Christy Hill in Sedgwick, is touted as the “World’s Smallest Bookstore.” It is operated by Bill Henderson, founder and publisher of Pushcart Press and the 2020 recipient of the American Academy of Arts and Letters’ Award for Distinguished Service to the Arts.

Photo courtesy of Jeffrey B. Roth

Earlier this year, Bill Henderson almost threw the letter he received from The American Academy of Arts and Letters in the trash.

“I thought they were going to ask me for money,” Henderson, founder and publisher of Pushcart Press and the Pushcart Prize, said Tuesday, during an interview in the Brooklin backyard of Rob McCall. “I almost didn’t open it up. When I did I found they wanted to give me an award. It was a surprise and a huge honor.”

Henderson founded Pushcart Press “to celebrate under-celebrated writers,” in 1972, in his Yonkers, New York, studio apartment. The author of a number of critically acclaimed memoirs and a novel, Henderson is also the recipient of the National Book Critics Circle Lifetime Achievement Award. In 1995, Henderson moved to the Blue Hill peninsula, and built “a tower on the hill over here and a cabin,” and began his quest to become part of the local community.

In its March 23 announcement, the Academy said Henderson, was being “recognized for his significant contribution to the arts as founder and publisher of Pushcart Press….Devoted to publishing literature that is deserving and non-commercial, Pushcart Prize started with founding editors Joyce Carol Oates, Paul Bowles, and Ralph Ellison, and continues today as the publisher of the prestigious Pushcart Prize anthology, revered among writers and recognized as among the most influential publishers in American History by Publishers Weekly.”

McCall, Pastor Emeritus of The First Congregational Church of Blue Hill and longtime friend and colleague of Henderson, whose new Pushcart Press book Some Glad Morning: Holding Hope In Apocalyptic Times, which will be released nationally in October, said Henderson earned the award for his literary work as a writer and publisher. McCall added that Henderson has “done a lot for a lot of people.”

“This is one of the things that Bill does,” McCall said. “He finds…unpublished authors and gives them a chance to be heard and to be read. The Pushcart Prize volume that has come out every year for 45 years, comes from material gleaned from all over the country, from literary journals, poetry journals, and, when a writer gets something published in the Pushcart collection, it’s something to put on your resume.”

Henderson launched the Pushcart Prize anthology in 1976. Immediately, it gained the praise of literary critics, and was featured in a New York Times book review.

“It was astonishing,” Henderson said. “It was suddenly a huge hit. I was spinning around, It was incredible that people thought it was important and it has stayed that way for 45 years. It gives me faith that this country has a good heart.”

In 2015, Henderson opened the “World’s Smallest Bookstore,” on Christy Hill in Sedgwick. Situated in the woods, the nine-by-twelve-foot wood framed building carries a complete inventory of Pushcart Press titles, plus many “hand-selected,” lightly-used classics. Originally, Henderson opened the book store on Route 172.

Henderson said that when he opened his bookstore, industry prophets predicted the death of the print book publishing industry due to the rising popularity of ebooks. After a brief time, the sale of ebooks began to fall, and print books; and, brick and mortar bookstores made a comeback.