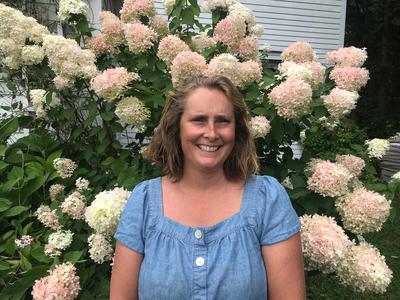 A 51-acre wooded lot, near 37 Hales Woods Road, in Brooklin, is in the first phase of being developed as a composting facility that will serve Blue Hill Peninsula residents.

On August 26, the Maine Department of Environmental Protection announced that Chickadee Compost, owned by Brooksville native, Katherine Tomkins, was awarded a $40,000 Waste Diversion Grant. The grant funds projects that will divert waste from disposal by expanding composting and recycling opportunities across the state.

“Maine DEP is providing these grants to help businesses, institutions and municipalities address solid waste management challenges,” according to a MDEP press release. “Reducing the volume of materials we consume by reusing items, and recycling products and packaging can significantly reduce our environmental impacts and help to enhance sustainability, reduce greenhouse gas emissions and cut our overall costs.”

The Brooklin facility is one of seven Maine composting projects that will share $129,628 of a total $461,247 in funding during the first round grant awards. DM&J Waste, in Ellsworth, was awarded $34,450 through the grant program. The DEP will begin accepting a second round of grant proposals in October.

“The $40,000.00 grant award to Chickadee Compost will be used to site and develop a community-based compost operation, serving a year-round population of 12,282 residents from nine communities,” David Madore, director of communications, education and outreach/legislative liaison, said. “The operation should divert and process 22,000 pounds of food scraps during the first year of operations, and up to 330,000 pounds by year four.”

Tomkins, who grew up in Brooksville and is a 1997 George Stevens Academy graduate, left the area to pursue a degree in history and international relations, and spent the next 20 years living overseas, in New York City and Seattle. For 10 years, she worked for the International Rescue Committee serving resettled refugees and later worked in Afghanistan, Indonesia Kenya, Uganda, and other countries in Africa.

“For the past five years, I have been Director of Development for a nonprofit called SeaShare, based in the Seattle area, which sends millions of pounds of seafood to food banks across the country each year,” said Tomkins, who returned to the Blue Hill Peninsula with her family, in 2018. “Feeling the compounding urgency of the climate emergency, using my knowledge around food waste and its impact on the climate and, inspired by other companies in Maine and other parts of New England, I decided to pursue developing a community composting company for the Blue Hill peninsula.”

Last year, while keeping her “day job,” Tomkins began researching the need for a small community composting company in the area. In October 2019, she completed the week-long Maine Compost School course, which is a collaborative program operated by the University of Maine Cooperative Extension, the Maine Department of Agriculture, Conservation and Forestry, and the Maine Department of Environmental Protection.

“I am not actually composting yet,” said Tomkins, who spent last Thursday with CES Inc., environmental engineers, at the Hales Woods Road site. “We just closed on a large lot in Brooklin about a month ago, and will be using 2-3 acres for composting, while the remaining 48-49 acres will remain as forest. Our focus is on the Blue Hill peninsula—from Castine to Surry and down to Stonington, including the towns of Blue Hill, Brooklin, Brooksville, Deer Isle, and Penobscot.”

Initially, Tomkins will run the company alone. Once the composting is fully under way, she hopes to hire one or two additional employees. Chickadee Composting will employ a process known as windrow composting.

“The process of turned windrow composting requires an initial, immediate mixing, and then turning with a tractor or loader, at least weekly, at the start, with less turning as the windrow ages and then cures,” Tomkins said. “I will be starting with a mid-sized tractor, and that’s it. Larger commercial compost operators often use windrow turners to turn their piles, and while turners are highly efficient, they are also very expensive.”

Tomkins does not yet know the annual volume of composting the company may eventually achieve. At this point, she is working with the engineering team on site design and flow.

“We are still working out the details of the volume we will be able to fit on the relatively small site,” Tomkins said. “I am hoping to be diverting 100,000 pounds of food waste annually from the peninsula by the end of year two, and 200,000 pounds annually by the end of year three. Food waste typically weighs about 1,000 pounds per cubic yard. The MDEP grant will go a long way in helping with the purchase of a dump trailer, toter bins, and with site preparation and development.”

Wood shavings, sawdust, wood chips, and bedded horse manure will be added to food waste at a ratio of about 4:1: 4 parts dry carbon to 1 part food waste, Tomkins said. Typically, compost loses “up to 60 percent of volume” during the composting process.

“In Maine, taking into account some slowing down of the process in the winter months, most compost takes 6-9 months to finish,” Tomkins said. “I plan to sell direct to consumer in bulk or in 5-gallon buckets, (BYOB—bring your own bucket). I want to avoid using plastic bags in selling smaller quantities. I will also sell to landscaping companies, and hope to also sell at local farm and garden stores. At this time I’m going to keep it simple and only produce a basic all-purpose 100 percent compost.”