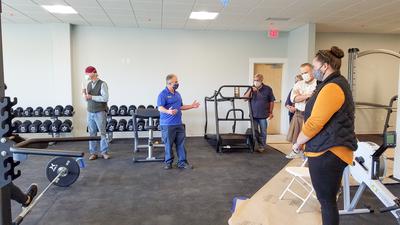 For many months the public has been watching the construction of the Lawrence Family Fitness Center. During tours last Friday and Saturday, October 2 and 3, the public had a chance to see inside the still unfinished facility. During the Saturday tour, Chuck Lawrence announced plans to break ground in the Spring of 2021 for a new gymnasium building which will include a basketball court, a walking track and office space.

Chuck and Belinda Lawrence, owners of Tradewinds Markets and other businesses, funded the $5.2 million fitness center located behind Tradewinds. About 100 people attended the “sneak preview” of the 13,000-square-foot facility on Friday, Lawrence said Saturday morning.

“We’ve gotten behind a little bit [with the pool] because of COVID, but we’re in good shape,” Lawrence said, while standing in the lobby/reception area of the building, which features observation windows of the six-lane pool. “On Monday, October 5, we pour the concrete around it, and then in two days, they [Massachusetts-based pool contractor] spray the liner on. Then you immediately put water in.”

Once the pool contains water, the building’s sprinkler system can be activated, Lawrence said. After water fills the pool, workers will spend about four weeks laying tiles around the pool’s perimeter and on the walls. The tiles are similar in size to bathroom tiles. Completing the pool lane marks took three weeks, he added.

“It’s worth waiting for because it’s going to be awesome,” Lawrence said. “I’ve been trying to be patient and I know the community has too, but we’re very, very close.”

Lawrence hopes the pool will officially open to the public during the first week of November. The fitness center may open by mid-October. The Down East Family YMCA will operate and staff the facility, Lawrence said.

“With COVID, we all have to worry about safety,” Joy Bragdon, director of wellness and fitness for the Blue Hill YMCA, said. “We are going to have online sign-up sheets for the pool. There’s one person per lane. You get a half-hour slot for the pool, and when you’re up here [fitness center], it’s an hour. Bragdon said the YMCA is continuing to follow Maine CDC guidelines regarding gym facilities.

The benefits of becoming a charter member includes a one-month membership with no “Join Fee,” eight guest passes, an “Official Lawrence Family Fitness Center Travel Mug and permanent recognition as a Charter Member in the lobby. Family membership rates are based on income levels, Lawrence said.

“This is going to be a big deal for me,” Blue Hill resident Chris Cox said. “I live about a mile away. In fact, I just volunteered to be an assistant swim coach.”

“When we were building this room, [pool area], people were always calling me and asking: ‘Are we going to have a walking track?’ I had to say ‘no,’ because we can’t do a walk around the pool because of the humidity and all that,” Lawrence said. “So, we’re going to build a gymnasium with an elevated walking track. We’re pretty excited about that—that’s Phase II.” 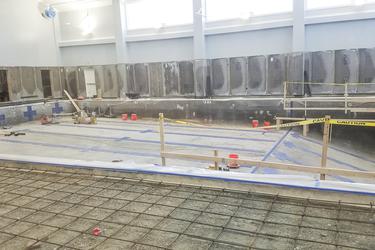 Construction work on the six-lane, 25-yard-long pool, part of the new Lawrence Family Fitness Center, is entering the final phases, Chuck Lawrence told guests, Saturday morning, October 3, during a sneak preview tour. If all goes as planned, the pool will open sometime in early November. 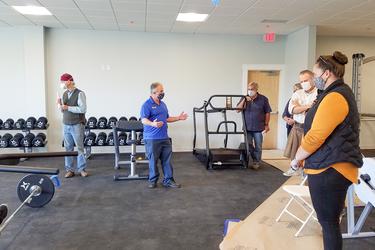 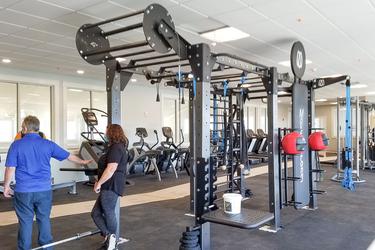 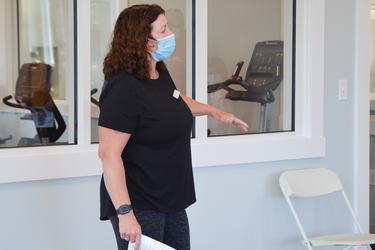