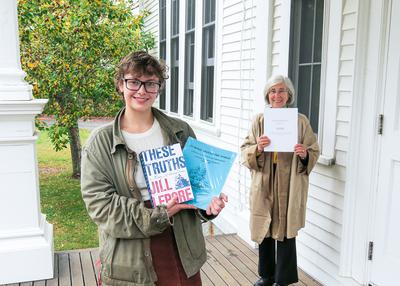 Senior Holly Ibarguen holds books given to her by Diana Page as part of the Blue Hill Historical Society History Award. Page is holding Ibarguen’s certificate.

Thirteen George Stevens Academy seniors recently received book awards that traditionally would have been presented at an all-school assembly in the spring of their junior year.

Diana Page gave the Blue Hill Historical Society History Award to Holly Ibarguen on the front steps of the Academy Building on September 28. The award recognizes a junior who has excelled in the study of history and who exhibits intellectual engagement with understanding the importance of the past and its impact on the present and future.

Ibarguen received a certificate and a pair of books from Page after the two spoke briefly. Though the senior plans to study nursing, she shares her family’s passion for history.

The other awards were given out privately by Director of College and Career Counseling Peter Goss.

The Bausch & Lomb Honorary Science Award, given by the University of Rochester to a junior who demonstrates exceptional promise in science based on achievement in a rigorous science curriculum and in science-related activities was presented to Hannah Dyer.

The Brandeis Book Award, which honors a student who has shown outstanding academic achievement and who has made substantial contributions to the school and local community was presented to Josie Czuj.

The Dartmouth College Book Award, given to a junior who ranks in the top 10 percent of the class, is of strong character, has made a positive impact on the school community, and has excelled in at least one nonacademic area was presented to Nathan Dauk.

The Frederick Douglass & Susan B. Anthony Award, given by the University of Rochester to a junior with a demonstrated commitment to understanding and addressing difficult social issues, who provides leadership and dedication to community action, and who has earned strong marks in rigorous humanities and social science courses was presented to Keegan Butler.

The George Washington University Book award, which recognizes a junior who embodies the GW drive and spirit, specifically with their academic excellence, leadership outside the classroom, diversity of thought, and the ability to put thought into action was presented to Evan Chapman.

The ISIP award, which recognizes a junior whose independent project shows, in both design and execution, the highest degree of creativity, excellence, and responsibility was presented to Hope Bowden.

The Industrial Arts Award, which recognizes a junior who has excelled in Industrial Arts and shown exemplary attitude, collaboration, and achievement was presented to Garrett Parker.

The Phi Beta Kappa Prize, given to a junior who demonstrates a strong sense of intellectual curiosity both in and out of the classroom and a desire to connect education with issues in the wider world was awarded to Magnolia Vandiver

The Rensselaer Medal, given by the Rensselaer Polytechnic Institute to a junior who has demonstrated high academic achievement, excelled in advanced math and science courses, and has exhibited significant involvement in extracurricular activities was awarded to Grace Broughton.

The St. Michael’s College Book Award, given to a junior based on academic achievement and social conscience as demonstrated through sustained and sincere commitment to service, issues of peace and justice, and concern for others was presented to Anna Trowbridge.

The Smith College Book Award, which recognizes a young woman who exemplifies academic achievement, leadership qualities, and concern for others was presented to Ellis Murnik.

The Williams College Book Award, given to a student who has demonstrated intellectual leadership and has made significant contributions to the life of the school was presented to Elia O’Hara.