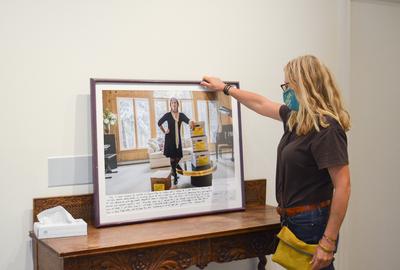 Patrisha McLean, a domestic violence survivor, chooses photos for her “Finding Our Voices: Breaking the Silence of Domestic Abuse” exhibit on display throughout October at the Blue Hill Library.

Portraits of women, 18 to 80, along with their stories of surviving domestic abuse, are on display in the Britton Gallery and Howard Room at the Blue Hill Public Library throughout October.

The work of photojournalist Patrisha McLean, the exhibit, “Finding Our Voices: Breaking the Silence of Domestic Abuse,” consists of photos and audio accounts by Maine women from all walks of life who have survived domestic abuse.

McLean, the ex-wife of folk singer Don McLean, best known for his 1971 song “American Pie,” said she endured 29 years of physical, mental, emotional and sexual abuse during her marriage. That ended in 2016 when Don McLean was arrested and her story became public. On Valentine’s Day in 2019, McLean launched the traveling exhibit.

“I’m very connected to this county,” McLean said Thursday, October 1, while setting up the exhibit at the library. “I had a house in Castine. We are taking banners all around the Blue Hill peninsula, promoting the exhibit.”

Among the women featured at the exhibit is Maegan Grasile, an Ellsworth artist, who survived 11 years of domestic violence at the hands of a man she met when she was 23 and on a break from college, McLean said. Grasile, McLean and Dorathy Martel, executive director of the NextStep domestic violence project, will be featured during a 6 p.m., Wednesday, October 21, online program about domestic violence hosted by the library.

“My abuser was 24 years older than me,” Grasile said in an email interview. “I met him when I was 23 years old on a break from college. It was a whirlwind romance; he bought me a car, took me to Key West, and it was while we were on vacation that he physically assaulted me for the first time. When I got pregnant things began to get worse, and by the time we had two daughters, he was abusing me daily. I tried to hide it from my children, but I couldn’t. One time he threw a full beer at my face and gave me a bloody nose while I was holding my youngest and standing next to my other daughter.”

It wasn’t until Grasile noticed that her children were showing signs of abuse that she turned to NextStep in Machias. For months she worked with NextStep, but remained living with her abuser.

“I worked with them for six months to get out of that situation, but not before he broke my hip,” Gasile said. “I had to have a full hip replacement. NextStep moved us into Machias housing, but he tracked us there and was harassing us. The agency then moved us to Ellsworth where we lived in the shelter for two years…but the abuse continues as he uses the children as a way to interact with me, and, (uses) the child support as a means of control.”

Martel and NextStep helped both McLean and Grasile to escape their abusive relationships. Martel, Grasile said, put her in touch with McLean.

“Next Step knew of her project ‘Finding Our Voices’ and thought that I might be a good fit for the project,” Grasile said. “The first time I spoke to Patrisha was on the phone and she put me at ease with her kindness and understanding. She asked me to be part of the show and I was far enough removed from the situation that I felt it would be more healing than anything. I wanted other women to know that they were not alone in this fight. It took so many people to put me back together after being abused and all of them were patient and supportive; I wanted to do the same thing for somebody else.” 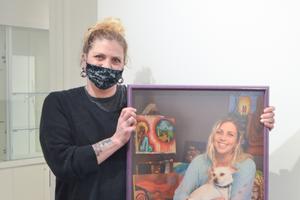 Maegan Grasile, an Ellsworth artist who survived 11 years of domestic abuse, holds a portrait of her taken by Patrisha McLean. Grasile’s portrait is part of an October art exhibit on display at the Blue Hill Library. 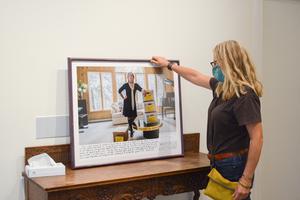 Patrisha McLean, a domestic violence survivor, chooses photos for her “Finding Our Voices: Breaking the Silence of Domestic Abuse” exhibit on display throughout October at the Blue Hill Library.