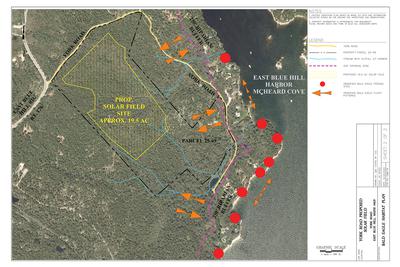 A map of a proposed solar farm in Blue Hill.

A York Road, East Blue Hill, solar-farm project application was found to be incomplete during a Monday, November 9, Blue Hill Planning Board meeting.

Known as Blue Hill Solar LLC, the solar farm is being developed by Borrego Solar on a 50.76-acre wooded site. “We are proposing 19.7 acres of panels within the fence,” said Ryan Baliey, the engineer assigned to the project. “The total number of panels will vary depending on the type that is procured for the project, but it is expected that this project will utilize about 10,300 panels mounted on a Terrasmart racking system.”

The project, Bailey said, will participate in a net energy billing program, which will sell power to a group of large-scale private and public entities in Versant Power’s service territory. The 530-watt panels are expected to generate a total of about 5.4 megawatts of direct current solar power.

Attorney Kristin Collins, who is representing a group of about a dozen York Road home and property owners, said her clients are concerned about the clear-cutting of old growth forest and the impact the solar farm could have on wildlife, habitat, storm water run-off, soil erosion and about other potentially negative impacts on the area. The majority of the residents have lived in the neighborhood for many years, she added.

“The neighborhood has looked as it does for a long time and this particular property is much adored by the people who live on that road,” Collins said. “They are not really happy to see it developed—not necessarily for solar, but for anything that is going to be a clear-cut of 20 acres of woods. They’re concerned about what comes with that, like runoff, and they are close to water, about groundwater pollution and things like that.”

Pearse and Viki Morris, who own eight acres on McHeard Cove, 80 York Road, say they are both pro-solar power. However, they believe “industrial solar farms need to be located where they do the most good with the least harm.”

“The proposed solar farm on York Road will require clear-cutting a healthy coastal forest ecosystem filled with eagles, birds, wildlife, and valuable wetland habitats, along one of the most pristine coastal areas on the entire East Coast of the U.S.,” Viki Morris said. “The harm that will be done by clear-cutting a forest like this is enormous and permanent. If the proposed solar farm were being put on an old parking lot or fallow agricultural land, Pearse and I would be all for it.”

Another resident, Char Joslin, said her family has lived on York Road for 10 years. Joslin said that other members of the association are in favor of solar power, but they do not believe that the property, which sits on the bay, is appropriate for a solar farm.

“The planned, solar farm would be situated on a sloped area above York Road below the East Blue Hill Road,” Joslin said. “The loss of 20 acres of trees, mosses, ground covering, etc., will have an enormous adverse affect on York Road and our properties, below and abutting, because of excess water runoff/drainage issues, erosion, and potential effluent from any damaged PV units. These units can leak cadmium and other chemicals if they fail, break, blow over in a wind storm, and because of all of our water runoff, we worry about the degradation of our water resources. As it stands, our road already is challenged by road erosion problems after even moderate rain storms.”

The proposed site for the solar-farm is owned by the Dethier family. David Dethier, in an email, said the family was approached by Borrego Solar about the project. After a year of evaluating the pros and cons of the project, in addition to negotiating the terms with the company, the family agreed to move forward.

“The Dethiers were all raised to be both environmentally and socially aware,” David Dethier said. “We did not come lightly to the decision of pursuing the feasibility of this solar-farm option on our beloved land. All of us have a voice inside us that just wants things to stay the way they have been since we were children and since our grandparents and great uncles first came to East Blue Hill. The area of the solar farm represents less than 1/3 of the forested area between the Dethier house and the East Blue Hill Road. The solar farm will not make noise, will be minimally visible from upper York Road and is unlikely to have significant impacts on the stream, wetlands, and nearshore marine realm of East Blue Hill.”

Dethier said the land had been historically used for logging, granite quarrying and hay fields. The woodlands, he said, are composed of “scabby second and third-growth upland forest that includes spruce, dying balsam, a few white pine and soft maple.”

“The site is currently managed for timber, and is not old growth forest,” Bailey said. “The project will be completing a stormwater study and will ensure that post-installation, stormwater runoff from the site will match baseline conditions. We accomplish this by planting a native meadow mix and by leaving small gaps between each solar panel module to prevent sheeting across multiple modules.”

Collins, previously addressed members of the planning board and the Blue Hill Select Board, urging the town to enact a moratorium on solar-farm projects until it develops and adopts a solar-power generation ordinance. To that end, Collins provided the select board with copies of a solar ordinance adopted by the City of Belfast.

Planning board members unanimously agreed that the project application was incomplete. They listed 12 items that had to be corrected and/or provided before the application is reconsidered at their November meeting. In the interim, members of the select board and the planning board plan to discuss developing and adopting a solar ordinance at future meetings.