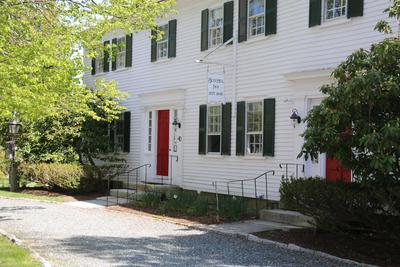 The Blue Hill Inn is seeing a 90 percent drop in reservations this summer.

The 14-day quarantine required for visitors coming in from out of state, as mandated by Governor Mills, local inn owners agree, is causing uncertainty and problems for the summer season.

Blue Hill Inn owner Duncan Hamilton has seen a scary drop in reservations—about 90 percent less than last year, he said. The inn has been closed since mid-March, and Hamilton plans to open to lodgers July 1, when restrictions may be eased.

While a coalition of campground and restaurant owners have filed a lawsuit against Mills over the quarantine rule, Hamilton said he doesn’t believe in the suit.

“I think she is doing the best thing with the information [available],” he said. “But I’d love to have guests.”

According to Gov. Mills’ phases of reopening Maine, Phase 3 “tentatively” begins July 1 and “contemplates” maintaining the 14 day quarantine on people entering Maine. Because of the uncertainty, Hamilton said he is being much more flexible with deposits and cancellation periods.

“There’s been tons of cancellations,” he said.

Julia and Horacio Herzberg haven’t canceled yet. The New York City couple have come to the area every summer for 40 years, and made their usual reservations at the Blue Hill Inn for the third week of July.

“We are waiting to hear if the inn opens,” Julia said via text. “We might have to change [reservations] to August.”

Barncastle Hotel is booking for dates starting June 1, for Maine residents and those who have already been through a 14-day quarantine period. But owner Isaac Robbins said reservations have taken a significant hit.

The uncertainty of whether the quarantine will continue throughout July and August poses difficulties when speaking with potential visitors, as well.

“That has been the chief point of frustration for a lot of people in our situation,” Robbins said. “Trying to answer that question without putting a big asterisk on it every time.”

Having to return thousands of dollars in deposits has hurt as well.

“So many of the small accommodation places by necessity supplement their winter incomes by their reservation deposits,” he explained. “Suddenly sending it all back in the span of a couple of weeks—tens of thousands of dollars in our case—that was a gut check. That’s when we realized we’ll have to do some different things.”

The restaurant side of his business is helping, where curbside delivery and take out has been solid.

“We’re figuring things out,” he said. “Like everyone, we’re rolling with it.”

Butch Smith, owner of the Lookout Inn in Brooklin, said he’s fielded a couple calls so far but has put in-state visitors off until June 1, per the state guidelines.

“I’ve got one couple, with a couple kids, from Boston trying to get in late June for a couple weeks. I’m telling them what the law is.”

So far, The Lookout’s summer reservations are few. “I expect it to be at least 50 percent less than it was a year ago. And that might be…” He paused. “I can’t come up with a word to describe it.”

One bright spot for Robbins is free time for long put-off maintenance and projects. “This sort of pause, like it or not, makes you reflect on that sort of stuff,” Robbins said. “So we’re kind of excited to see how we come out of this on the other side.”