Surry
Originally published in The Weekly Packet, July 30, 2020
Old Surry Village School named to the National Register
Five years ago, it was set for a training burn 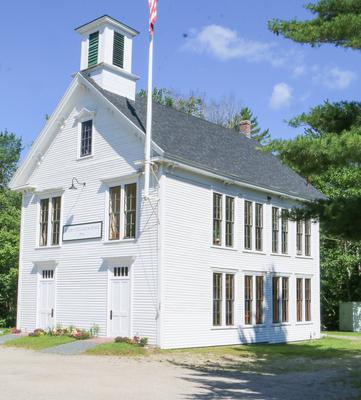 The restored Old Surry Village School shines on a summer afternoon. The building was named to the National Register of Historic Buildings on March 13.

A hardworking core of citizens stepped up several years ago, after learning that the town planned to send an 1872 former school and fire house up in flames as a training burn for the local fire department.

A school for 80 years, a fire station for 35 and then the home of the Ladies Auxiliary, the building had fallen into disuse and decrepitude to such a degree that then-Selectman Steve Bemiss estimated it would cost $700,000 to restore it in light of current building and fire codes.

Enter Glyneta Thomson, who formed the Old Village Schoolhouse Preservation Group and drew a core of volunteers together to restore the historic building and have it named to the National Register of Historic Buildings.

That was 2015. Five years, $100,000 in fundraising proceeds and donations, and countless hours of volunteer work later, both goals have been reached.

The Old Surry Village School was awarded its certificate March 13, nearly to the day of Maine’s bicentennial date of March 15, Thomson pointed out.

Citizens voted to give Thomson’s group authority to rehabilitate the building in 2016.

Early on, Thompson had contacted the Maine Historic Preservation Commission, learning that the building would only be eligible for consideration for the National Register if the doors were replaced with 19th century replicas, maple flooring laid over the concrete floor poured during the building’s fire house days, and the upstairs wall sheathing changed to match the downstairs. The work was done, and in 2016 the group applied to have the building placed on the National Register.

The process took time. But in 2019, the Commission returned for an inspection. “They were totally happy, surprised and pleased that we were able to put it back to such great shape,” Thomson said.

The National Park Service of the Department of Interior, which is responsible for naming buildings to the National Register, awarded the building its certificate based on the Commission’s recommendation.

Surry has several historic buildings, including Rural Hall, built in 1871, and the Old Town Hall, built in 1828. Both of those buildings are currently used by community groups. The Old Village School has already joined their ranks, holding open houses and community gatherings. Thomson noted that it may even return to its original use this fall, with students from Surry Elementary School possibly holding a class or two there.

Thomson said she never lost faith in the project. “We had a group of core volunteers that were just amazing in our belief that we had a building worth saving….If we needed a gallon of paint, we bought a gallon of paint.”

GALLERY — On the National Register 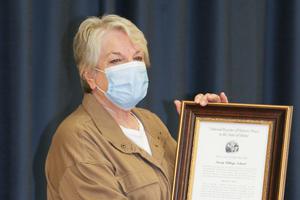 Glyneta Thomson displays the certificate from the National Register of Historic Buildings at the July 18 Surry Town Meeting. 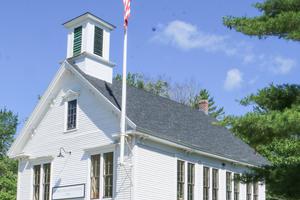 The restored Old Surry Village School shines on a summer afternoon. The building was named to the National Register of Historic Buildings on March 13.