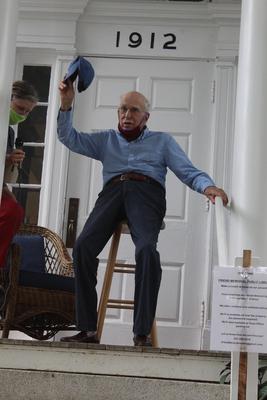 From the porch of the Friend Memorial Library, Roger Angell doffs his cap to the crowd of well wishers on the lawn below.

As Roger Angell approached his 100th birthday, the Friend Memorial Library on August 8 honored him, its best-known and probably oldest supporter, with a band, a governor, a proclamation, a parade, a speech and plenty of well wishes.

His actual centennial doesn’t happen until September 19. “I crossed my fingers,” he said from the steps of the library to the hundred or so people gathered below him.

“Roger Angell Day” wasn’t the first time Brooklin honored the writer. When he was just 90, the town held a parade to honor veterans, which he described in his book, This Old Man: All in Pieces. He wrote that he got to doff his cap at the appropriate moment, having served in the Air Force during World War II.

The description of a Brooklin parade in This Old Man could almost have described the scaled-down version that celebrated his birthday. “Families of every size walked in from their cars, parked along Route 175,” he wrote. They watched the “fire trucks…shined-up ancient roadsters and kid- and Lab-laden pickups” that, “honking all the way, streamed slowly past.”

Angell’s centennial parade came after a concert by The Treble Makers and the speech-making on the library lawn. Gov. Janet Mills read a proclamation honoring Angell as he sat above her on the porch. She listed some of the baseball stars Angell had profiled, mangling many of the names. “Mordecai Brown,” she said, using the pitcher’s given name. Angell shouted out his better-known nickname, “Three Finger!”

Angell served as the New Yorker magazine’s fiction editor for decades. He contributed articles to the magazine since 1944, and started to write about baseball and other sports, but mostly baseball, in 1962. He has also written a dozen books, including Late Innings and The Summer Game, and won many awards. He is the only person inducted into the Baseball Hall of Fame and named a fellow of the American Academy of Arts and Sciences.

Angell rose to speak after the governor, waving his WoodenBoat ball cap to the masked crowd. “If there’s any impulse to run up to the podium and carry me off on your shoulders and pass me around, resist it,” he said.

He thanked his wife, Peggy Moorman, who accompanied him onto the porch, and his late mother, New Yorker editor Katharine White. He said she was a passionate supporter of the library, where he worked one summer as a teenager. For years, he said, the Brooklin library has had the highest per capita readership of any library in the state of Maine.

He also thanked Brooke Dojny, a cookbook author and chair of the library’s board. Angell recalled how they had both participated in the library’s midsummer book signings, watching to see which writer had the longest line.

He apologized to people who had “little or no interest in an old guy from away” for the interruption to their Saturday.

“I’m always from away,” he said. “But as a Brooklin regular, I’m very proud of this.”

A chorus of “Happy Birthday” and “Take Me Out to the Ballgame” concluded the speeches, and an antique car parade streamed slowly past.

Roger Angell first came to Brooklin as a 12-year-old in 1933, to the saltwater farm in Allen Cove just purchased by his mother and his stepfather, author and New Yorker writer E.B.“Andy” White. During the summers he watched Andy White write, and, Angell wrote, “I learned things from him, the main one being to try to write simply and directly and to try to make it sound easy.”

He recorded his memories of Brooklin for the Friend Library, which created a video, Brooklin Memories (friendml.org/2020/07/30/roger-angell-birthday-celebration/). In it, he remembered sitting on top of a hay wagon, catching flounder for breakfast and taking girls in his 1928 Plymouth roadster to the movies in Blue Hill.

He told how his brother, Joel White, once lit a Roman candle that sent a ball of flame into the first selectman’s living room. “He was grounded just about forever,” said Angell. His half-brother Joel White later became a preeminent boat designer and builder, as well as the owner of the Brooklin Boat Yard.

Brooklin, said Angell on the video, has haunted him in so many ways. He, his children and his grandchildren learned to sail and to drive in Brooklin. “Sailing and driving, the same thing, makes you at home, makes it part of your home,” he said.

“I can’t begin to say how much the Whites’ place and Brooklin and sailing and this whole beautiful, beautiful scene here meant to me and still means to me and has meant to everybody in my family,” he said. 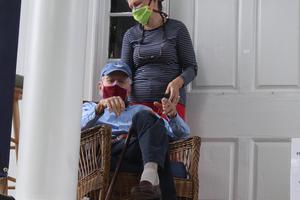 Roger Angell and his wife Peggy Moorman hold hands for a moment during the speeches commemorating his life and work. 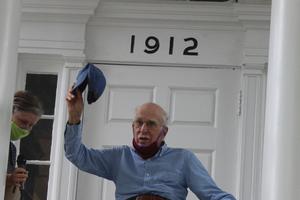 From the porch of the Friend Memorial Library, Roger Angell doffs his cap to the crowd of well wishers on the lawn below. 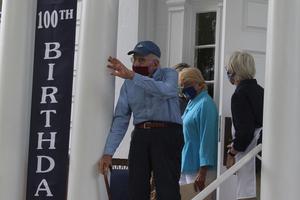 Roger Angell waves to the crowd at the end of his remarks at the Friend Memorial Library as Gov. Janet Mills and Board Chair Brooke Dojny look on. 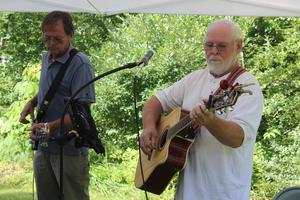 Paul Welsh and Keven Poland, two-thirds of the Treble Makers, entertain the audience as it waited for the man of the hour, Roger Angell. 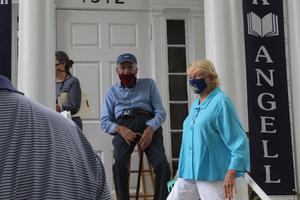 Roger Angell shares a laugh with Gov. Janet Mills after the ceremonies celebrating his centennial at the Friend Memorial Library. 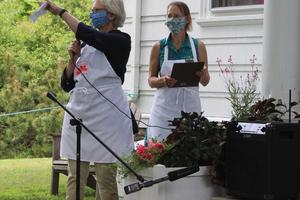