Sedgwick
Originally published in The Weekly Packet, April 23, 2020
Sedgwick may partner up to bring back alewife runs
$1.25 million grant-funded project 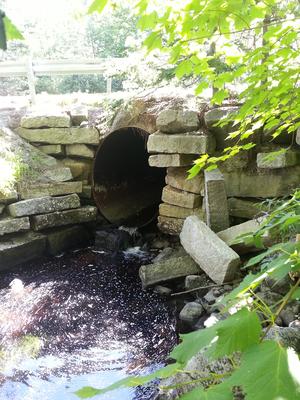 The culvert at Snow’s Cove on Route 15 is slated for a $1.25 million rebuild to allow alewife runs to Snow's Brook and Frost Pond in Sedgwick.

To open alewife fish passages to Snow’s Brook and Frost Pond, Maine Coast Heritage Trust hopes to partner with the town and Maine Department of Transportation on a $1.25 million project to replace the culvert at Snow’s Brook on Route 15.

Alewives, small fish from the herring family, weigh about one-half pound apiece and are prized as bait by lobstermen. Each spring, alewives run to local streams and ponds to breed, with the juveniles eventually making the passage back to larger waters. For both runs to be successful, the fish need help in navigating upstream to their breeding grounds through a fishway.

“It is really exciting that the Sedgwick project qualified for this MDOT program. (We just heard recently on that, after waiting many months.),” Ulbrich said prior to an April 16 meeting with selectmen and MDOT Regional Engineer John Devin.

Next, a letter of agreement between MDOT and the town needs to be signed by selectmen, guaranteeing the $750,000 assigned to the town match under the MDOT program. The two other grants secured by MCHT will pay for the match, with a separate contract between the town and MCHT to be drawn up.

One (virtual) attendee at the selectmen’s meeting questioned whether the state funding would come through, given the coronavirus pandemic.

“There’s a lot of insecurity these days regarding real money,” Ulbrich told selectmen. “We’re all a little more nervous than a couple months ago.”

However, Devin told selectmen that MDOT Commissioner Bruce Van Note was behind the project.

I was assured the Commissioner wouldn’t sign an agreement if he wasn’t comfortable about the funding being actually provided,” Devin said.

Selectmen agreed that the risk was real but, as Selectman Ben Astbury pointed out, “no one of us [project partners] is taking more of a risk than the other at this point.”

A town vote to accept the MDOT funding and move ahead with the project is also needed, and is likely to happen at a special town meeting this spring, with a public hearing beforehand.

“This is a solid one. It’s as solid as we can ask for these days,” Ulbrich said.

This is the third of five fishway restoration projects marked as high priority by the Three Town Alewife Committee (Brooksville, Sedgwick and Penobscot). Fishways at Pierce Pond and Wight Pond were restored in 2018. Fishways at Parker Pond and the Mill Pond in Brooksville have also been marked for restoration.

“When all five have been done, fish passage will have been restored to the entire Bagaduce River Watershed,” Ulbrich said.

If all moves forward for the Sedgwick project, construction will begin in summer of 2021, detouring island and peninsula traffic through Brooklin for about three weeks.