Brooksville
Originally published in The Weekly Packet, October 31, 2019
Carl and Susan Chase, pillars of local arts, die by choice
‘We have had full and happy lives’ 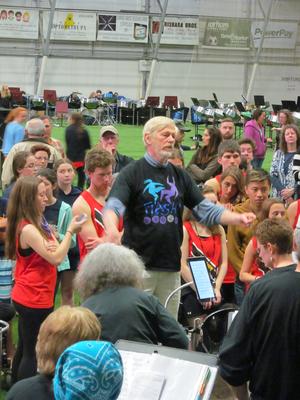 Carl Chase leads Flash! in the Pans at a Pan New England Steel Band Festival in 2014.

Carl and Susan Chase, longtime Brooksville residents and huge contributors to the local music and arts scene, died together in their home on October 27. The cause of death was suicide, according to the Hancock County Sheriff’s Department and by the couples’ own admission. Carl was 77 years of age, and Susan was 75.

“We have had full and happy lives, blessed with extraordinary good luck,” the couple wrote in a letter to the community found after their deaths. “It is unreasonable at our age to assume it will continue that way, and we want to leave while things are still good, before our luck runs out, not after!”

Carl Chase was best known for founding Flash! in the Pans, a community steel drum band that branched into the schools, summer culture—with the Monday evening fundraising concerts—and the wider steel band community, with the 2015 Pan New England Steel Band Festival held in Blue Hill in 2015.

“He did something that touched a lot of people over a long period,” Flash! treasurer and friend Matthew Freedman said. “I think of kids who were 8 years old when they started and are still playing in their 30s.”

Carl also was a sailor, competing in the annual Retired Skippers Race in Castine as recently as 2014.

Susan Chase, an artist, focused on outdoor sculpture and arts education, teaching for many years at Cape Cod Academy in Massachusetts, and locally at Bay School, George Stevens Academy and Brooksville Elementary School. Her work has been exhibited at local galleries and throughout the Northeast and is in collections across the United States. In Brooksville, Susan created a Sculpture Woods decades ago, set along the banks of Horseshoe Cove, and then resurrected it in 2013.

Their joint and conscious death highlights one of their own core beliefs: “We believe it is a person’s fundamental right to choose whether or not to go on living when they approach the ‘end-game’ of life,” they wrote. “We have come to this decision both independently and together.”

They list several reasons behind their decision, including fear of dementia and the burden it and old age places on families, and not being able to contribute to their communities as they have in the past. “We dread becoming useless, using up more and more resources and attention, and contributing less and less in return,” they wrote. “We feel that happening.”

They widen their gaze toward the end of the letter, stating they “have no desire to be a further witness” as “decency and rule of law are disappearing daily right before our eyes….Things are sure to get uglier and more violent as ‘survival of the fittest’ becomes the rule.”

Their death reflects their desire “to conclude our lives on a high note while we still have the wits and capability to manage it.”

A gathering will be held at the Susan Chase Sculpture Garden, at 150 Red Trail in Brooksville, on Saturday, November 2, from 2 to 5 p.m., with a memorial celebration to be scheduled at a later date.