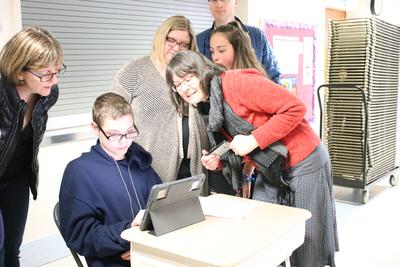 Blue Hill Consolidated School seventh grader Noah Bowles demonstrates how to use a data analysis program to analyze arsenic data, at a May 15 presentation at the school. At right is Dr. Jane Disney of MDI Biological Laboratory.

Student scientists from Blue Hill Consolidated School fulfilled their next step in an ongoing arsenic test project by presenting their findings to the public on Wednesday, May 15.

“This project is the culmination of a years-long effort in Maine and New Hampshire schools…to look at well water and bring those results to the community,” MDI Biological Laboratory scientist Jane Disney said.

The project is funded by a National Institute of Health award, and has BHCS seventh and eighth graders research the presence of arsenic in local wells, the effects of arsenic on invertebrates, and compile and graph the data they collect. They then sent the samples—77 in 2016 and 68 in 2019—to a Dartmouth College research lab, where it joined data from other participating schools.

“Rather than memorize facts, [students] do what scientists do,” science teacher Nell Herrmann said.

Students began by first turning on a tap and answering the questions, “Where does that water come from?” and “Who is responsible for keeping it safe?” and then moved into data collecting, Herrmann said.

The results? On the peninsula and Ellsworth, the average well has arsenic levels “well above” the 10 parts per billion standard set by the Environmental Protection Agency for public drinking water. In Blue Hill, 72 percent of wells had safe arsenic levels.

Private wells are not monitored by state or federal agencies yet 82 percent of homes in Hancock County have private wells, according to the presentation. High levels of arsenic in drinking water are linked to several cancers, health disorders, low birth weights and brain development issues. The presence of high arsenic levels in Maine is a concern because the bedrock contains high arsenic levels, Herrmann said. 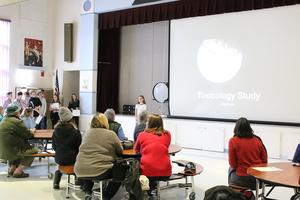 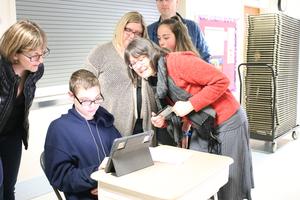 Blue Hill Consolidated School seventh grader Noah Bowles demonstrates how to use a data analysis program to analyze arsenic data, at a May 15 presentation at the school. At right is Dr. Jane Disney of MDI Biological Laboratory. 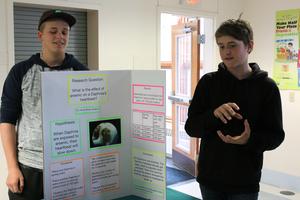 Blue Hill Consolidated School eighth graders Lucasz Jones, left, and Micah Bryan explain their research on the effect of arsenic on daphnia invertebrate, at a May 15 presentation at the school.