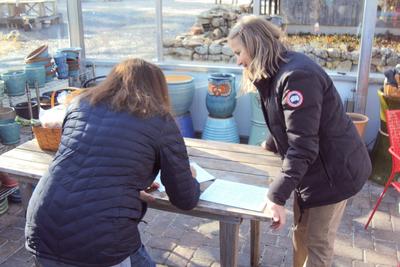 Semena Curlik, right, is gathering signatures from Blue Hill voters for a petition to place the Blue Hill Healthy Ecosystem Ordinance on the ballot to be voted on at town hall on Friday, April 3, as part of referendum voting that opens Town Meeting. Once enacted, the effective date of this ordinance will be January 1, 2021.

Two proposed ordinances, banning toxic pesticides and unencapsulated polystyrene, as used in buoys and floats, were presented to selectmen for review November 20. Both may be on the 2020 ballot for a town referendum vote in April, after selectmen asked the petition process be used to place them there.

Under the citizen petition process, the number of signatures collected must be at least 10 percent of the local votes cast in the last gubernatorial election. For 2019, that number is 168, which won’t be a problem, said Rick Traub, who drafted the pesticide ban ordinance after reviewing similar ordinances from 30 towns in Maine.

“We think, without hyperbole, it’s a life and death issue [that] most people are not aware of,” Traub said of the chemical glyphosate used in Roundup and other herbicides. Over 13,000 lawsuits are pending against Bayer, the parent company of Monsanto that markets Roundup, with four plaintiffs already winning trials, with jury awards in excess of $2 billion. Glyphosate is approved as a pesticide by the U.S. Food and Drug Administration, and, in April, the Environmental Protection Agency reaffirmed that it does not cause cancer when used properly, according to its review process.

Semena Curlik, a physician, and Gabrielle Wellman, proponents of the Unencapsulated Polystyrene Ordinance, also are behind the pesticide ban. The two also successfully brought ordinances banning single use plastic bags and polystyrene food containers to town approval in 2017.

Those votes came at town meeting, however, from articles placed on the warrant by selectmen. Chairman of Selectmen Vaughn Leach said this time he wanted to see a referendum vote, along with a petition process, for both proposed ordinances.

“The [referendum vote] was the driving force for my decision,” he said. “The petition makes more people aware of it.”

As with the single-use plastic ban and foam food container ordinances, selectmen raised the difficulty of enforcement. For the proposed Healthy Ecosystem Ordinance, Traub said educating the public, and prohibiting the sale in local stores of banned pesticides, goes a long way.

“We’re seeking to educate people,” he said. “The ordinance is as enforceable as any law in Blue Hill that’s regularly breached by a lack of enforcement.”

If approved, the ordinance would not go into effect until January 1, 2021, and would ban the application and sale of pesticides classified as carcinogens to humans or likely to be carcinogens to humans or as restricted by the U.S. Environmental Protection Agency, with the addition of restrictions imposed by the Canadian Ministry of the Environment and the European Commission, with several exemptions included. A copy of the ordinance, and accompanying information, can be read at BlueHillHealthyEcosystem.com.

Traub is also hosting three public informational sessions at the Blue Hill Library, beginning on Tuesday, December 10, when Brooksville organic farmer and advocate Eliot Coleman will speak on “ Why Pesticides are Superfluous,” followed by an overview of the ordinance and Q & A.

The Unencapsulated Polystyrene Ordinance is based on a Camden ordinance and bans the use of all unencapsulated polystyrene as a flotation device on any lake, stream, water body, harbor and coastal waters.

“I like the environment as well as the next guy,” Leach said. “So I did a little evaluation…and I threw away my own polystyrene float.” Leach said he had an old float that he placed in the water. “This was an old float that sat on land for years. I put it in, I didn’t have to walk on it or make it wiggle, and there were Styrofoam particles everywhere. The fish are going to eat those and I’m going to eat the fish.”

Curlik said it can be difficult “to wrap your head around a chemical,” but that “human beings and wildlife have not evolved to process plastics as a food source.”

The two petitions must be returned by December 31 in order to be placed on the referendum ballot, and Traub said a table will be set up for collecting signatures at the Winter Market, Saturday mornings at Mainescape.

For Leach, the amount of new town ordinances is concerning. “It’s an awful lot,” he said. “I thought public education would be something that would help, statewide or countrywide, to make people aware that there’s other choices. They don’t have to get the most powerful [pesticide]. There’s organic choices, or [others] less harmful.”