Brooksville
Originally published in The Weekly Packet, December 5, 2019
Buck’s Harbor Market will keep the lights on this winter
Open year-round 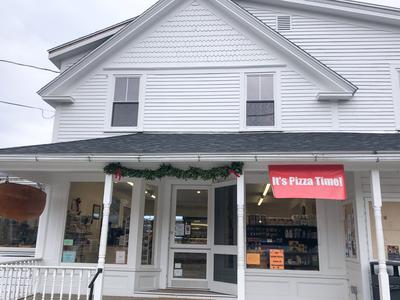 Buck’s Harbor Market is open for business during the winter months this year.

Residents of Brooksville will have a shorter distance to drive for grocery supplies, coffee and food this winter, as Buck’s Harbor Market will be open for business.

The store, which historically has closed after October, will have the lights on seven days a week, a decision that was made after a large renovation over the summer, according to assistant manager Jo Andrews.

“Those renovations were done for a purpose,” said Andrews. “It’s much more efficient for heating now, we have more space for more options for customers, we expanded the kitchen and are now offering pizza. With all the renovations, it just made sense that we stay open year-round.”

Brooksville residents took advantage of the warmth, hot beverages and food during the town’s annual tree lighting event on December 1. Between lighting the tree, caroling and visits with Santa Claus, the crowd of about 45 bustled in and out of the store, according to Andrews.

“People kept telling us how happy they were to have us open,” she said.

Having the store open during the winter months is something the community needs, added Andrews, as the store is the only retail store open in Brooksville. Historically, residents had to drive to Blue Hill or Sedgwick for their grocery and other needs. With Buck’s Harbor Market stocked with produce, fresh cheeses and meats and other grocery needs, alongside winter items such as flashlights, batteries and de-icer, community members will be able to get their provisions without having to drive longer distances.

“It also gives workers a place to come for coffee and lunch, and we are open for breakfast, lunch and dinner,” said Andrews. “We have breakfast sandwiches made every morning, sandwiches and soups for lunch, and the pizzas have been flying out of here. The response to us being open right now has been more than favorable.”

The winter months present some potential challenges when dealing with things such as vendors and getting product to the store, particularly when the roads are bad. Andrews said she has confidence that she will be able to keep the store stocked in full, though with some adjustments in ordering.

“The drivers we deal with are great, and overall they seem to think there shouldn’t be many issues,” she said.

The store is open until 6 p.m. Monday and Tuesday, and 7 p.m. Wednesday to Sunday, according to Andrews, and so far, there have not been any regrets about the decision.

“We needed to be as accessible as we could for as many people as we could,” said Andrews. “From Cape Rosier to the other end of town, we’re here for those people. We have you covered, we’ve got your back.”