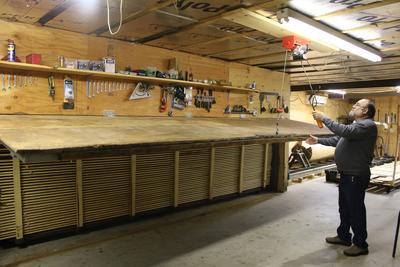 “I started this business four years ago. I had a chance to buy the equipment off a man down in Sedgwick.”

That man was Foster Blake, who had modeled his mill on the former Donnell Mill. Both produce quarter-sawn clapboards, resulting in a beautiful, vertically grained slice of wood.

“I built the building, set it up and started building clapboards the first year. We’ve been milling clapboards ever since,” Smith said.

Smith can produce a knot-free, kiln-dried clapboard up to 16 feet in length because he does it the old-school way. Unique to New England, the radial milling process cuts into the log’s core, yielding pie like slices instead of today’s quick-and-easy method of cutting clapboards horizontally from a log.

“That’s what makes us unique,” Smith said. “As far as I know, the longest [horizontally cut] clapboard is 10 feet.”

He did wager someone was likely making 16-foot clapboards out of California redwoods but not anywhere close to Maine.

Smith’s customers “have been asking for cedar,” he said, although finding a Western Pine cedar log—the variety Smith uses—that is 22 feet wide at the top, the length needed to cut a 16 foot clapboard, can be “next to impossible to find.”

Today, Smith and his son and partner, Dan, are cutting and drying Northern White Pine clapboards. (Smith’s son Daryl is also a partner.)

A carpenter for 35 years, Smith transfered those skills to milling clapboards.

First, the log has holes drilled on either end to mount it on a machine that turns it around. A radial saw cuts a pie-slice-shaped wedge from the outside to the center, 5.5 feet wide with 0.5 thickness at the base tapering to 1/8 inch at the top. The clapboards are then dried to about 7 percent humidity.

“This clapboard doesn’t warp or twist and holds paint longer,” he explained. “I believe the paint goes into the lines [wood grain] and sticks on better than a regular clapboard.”

Smith finds his logs from local loggers, such as Haynes, Inc., a logging company out side of Bangor.

“I just call. He knows what I’m looking for,” Smith said. “If he gets something in, he’ll call me. I pay a premium price for a log because I need premium logs.”

A log of any variety is considered premium if it’s free of the nails and wires that bedevil trees grown around houses or aren’t blow downs, which usually have splits.

“Parker Point has beautiful logs but they either have rot or knots three inches deep,” Foster said.

In the four years since Smith opened Maine Milling, LLC, he has provided radially sawn clapboards for local homes and has filled special orders for Viking Lumber. Smith’s clapboards were also used in the 2016 restoration of the Paul Revere House in Boston.

But Smith’s clapboards are “not just for restoration,” he said but are “comparatively priced” to other select clapboards.

“When push comes to shove, these clapboards are not more expensive than a re-sawn clapboard,” he said. “The paint stays on three times as long.” 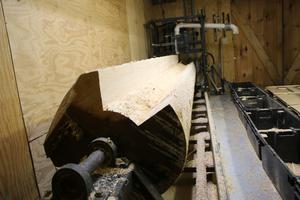 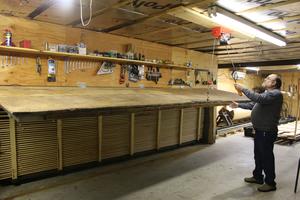 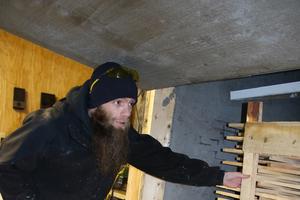