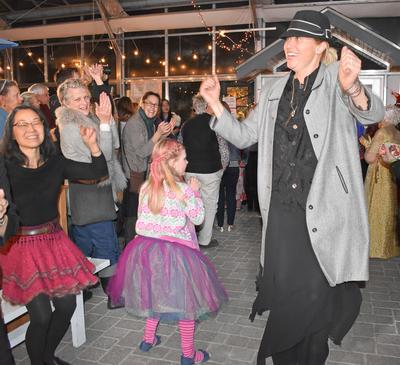 At the end of the show Julie Jo Fehrle dances with the models on the runway.

With its wide open space and high ceilings, the glass greenhouse at Mainescape was transformed into a runway-style fashion show March 30.

The event, organized by Julie Jo Fehrle, Maxfield Y. Rhine, and Abigail Jakub served as a fundraiser for the Tree of Life food pantry in Blue Hill and also drew attention to its sister thrift store, TurnStyle.

The models—ranging in age from 5 to 85—walked down a runway in front of a capacity crowd. All were from the Blue Hill Peninsula, and all wearing outfits that either came from the TurnStyle or were later put on sale there.

As a surprise to co-organizer and fashion enthusiast Rhine, Fehrle arranged for two people to attend the event to impersonate well-known fashion editor Anna Wintour and designer Karl Lagerfeld.

Money from clothing purchased at the TurnStyle directly benefits the Tree of Life, and the fundraiser served in exactly the same way.

With hundreds of people visiting the food pantry weekly, the nonprofit has been part of the community for three decades. “No-one in our community should go hungry and that is why we are gathered here tonight,” said Sarah Pebworth as the event started.

As the first Blue Hill fashion show, the event was deemed a success by organizers. The show had an estimated 250 attendees, and raised $4,500 for the food pantry. Local shops and businesses donated a variety of food and refreshments, which was available at the event.

“We are all wiped out and tired” said Rhine. “We enjoyed everyone’s support and excitement for the show though. Personally, I would love to have another fashion show.” 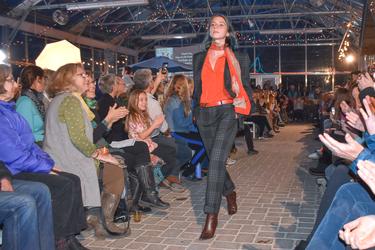 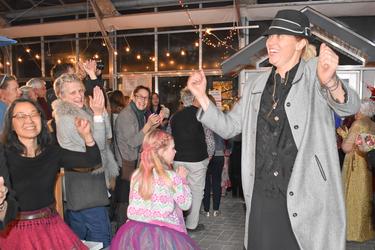 At the end of the show Julie Jo Fehrle dances with the models on the runway. 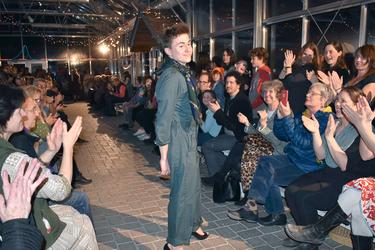 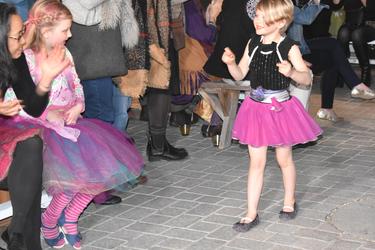 May Schultz dances down the runway.