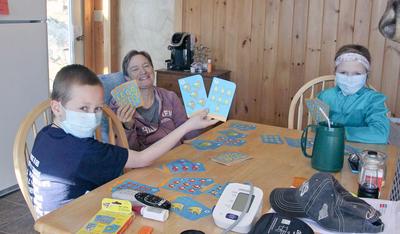 Corinne Pert plays cards with grandchildren Brady, left, and Cadence after returning from a round of treatment last year.

The 2017-18 school year is under way at Brooksville Elementary School, and the pre-K/kindergarten classroom is without longtime teacher Corinne Pert. Pert resigned at a meeting of the school board in August.

Pert, who was out most of the school year last year as well, did not resign to retire, however. Instead, she has been forging through a battle with cancer, something she was diagnosed with in January of 2016.

“We were dumbfounded,” said Pert of hearing the news with her husband Dan. “Something didn’t feel right, so we went for tests and that showed a mass on my lung. I’ve never smoked a day in my life, and we’ve always been very active.”

To make matters worse, the Perts were maneuvering their way through being displaced from their home as a result of a house fire only a couple months before. By the time Pert started treatments in Boston, the couple had moved into their family camp on Salt Pond.

Through the treatments, tumors were found on Pert’s liver and pelvis in addition to the one on her lung. The treatment was aggressive, as she did the equivalent of 30 treatments in 10, to try and shrink the tumors quickly. The radiation did not work, but the results of a tissue sample found that Pert had a genetic mutation called ROS1. Incredibly rare, the mutation is in 1-2 percent of patients with non-small cell lung cancers. The mutation, said Pert, allows her cancer to be treatable.

“When we found out I was ROS1 positive, the radiation oncologist was really happy,” she said. “There is no way to cure the cancer, but I was able to go on medication to help treat it.”

The medication Pert was put on was a trial medication, not approved by the FDA until a month after she started taking it. The drug, called Crizotinib, was able to shrink the tumors found during the early stages of her treatment. While those tumors shrunk, however, another one formed in her brain.

Pert returned to teaching in a part-time capacity during the second semester last school year, but she knew she would have to do more testing and treatments over the summer. She also knew that the energy she was spending at school was the only energy she had during the day.

“On the days that I was at school, it was the only thing I could do that day,” she said. “It wasn’t an easy decision [to resign], but I knew I had to.”

She has already signed up to volunteer at the school on Mondays and Tuesdays this year.

“I can’t really stay away from it completely,” she said.

Pert has since started a new trial of medications, and was scheduled for her first scans last week.

Pert has spent her summer at the family camp, running what she calls “Camp Grandma.” Three days a week, Pert hosts her grandchildren as they spend the day swimming, working on projects and spending quality time together. Because of her health, she has relied on the help of camp “counselors,” her daughter and other family members, to take on some of the load.

“At the hospital [in Boston], everyone just has such a sense of hope,” she said. “It really helps you stay positive. This is a chronic disease, I understand that I’m going to die from this, but the research that’s being done and the studies that happen make me hopeful for future patients.”

While hiking the Grand Canyon may no longer be an option for the adventurer, Pert said she has set a modest goal for before the snow flies.