Sedgwick
Originally published in The Weekly Packet, May 25, 2017
Community comes together to build Sedgwick playground 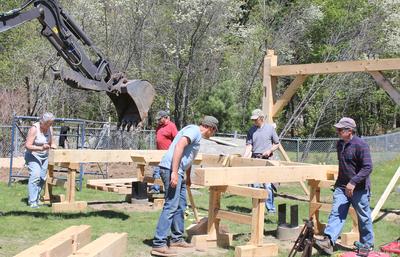 Andrew Brown of Liberty Construction, in foreground, works with volunteers to construct a shaded gazebo with timber he donated to the Sedgwick Community Playground effort.

It began with a vision in the minds of two parents and ended over one year later with the Sedgwick Community Playground. After months of grant writing, fundraising and planning, culminating in three days of building, with a huge, effort on Saturday, May 20, by school employees and over 70 community volunteers, the vision was complete.

“We totally killed it,” said Michael Rossney, who drove the effort with wife and school board member Michele Levesque.

The playground features a gazebo, sandbox and all the equipment that children love to climb, swing, spin and hang on, and 175 cubic yards of wood chips hand-shoveled into tractors and raked over the playground’s expanse. Because who doesn’t want a soft landing?

“We had this concept in our heads of people showing up with wheelbarrows and tractors and it’s exactly how it came together,” Rossney said.

Funded through a $15,000 matching grant from Kaboom Foundation, and donations, both large and small, cash and in-kind, from local businesses and individuals, the total cost of the playground was $55,000.

One summer resident donated $10,000 but many people just handed them checks and envelopes containing $10, $20 and $50 bills, Rossney said.

The ribbon cutting may have happened on Tuesday, May 23, but Sedgwick students broke the playground in first when they returned to school on Monday, May 22. The Sedgwick Community Playground, which includes the school’s Rocky Ridge Fitness Trail and the adjacent ball field, is dedicated to Principal Don Buckingham, retiring this June after 28 years.

“We’re exhausted but extremely gratified to see this community come together and totally pull this off,” Rossney said. “I’ve never seen anything like it.”

GALLERY — From the ground up 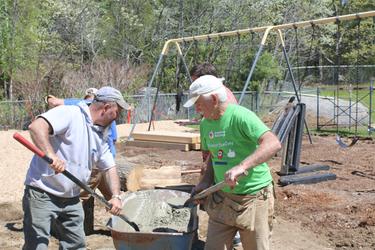 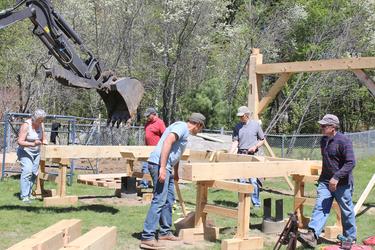 Andrew Brown of Liberty Construction, in foreground, works with volunteers to construct a shaded gazebo with timber he donated to the Sedgwick Community Playground effort. 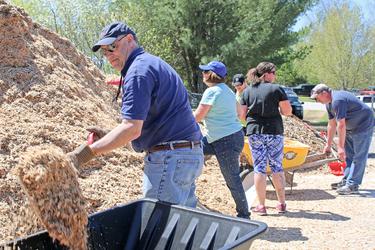 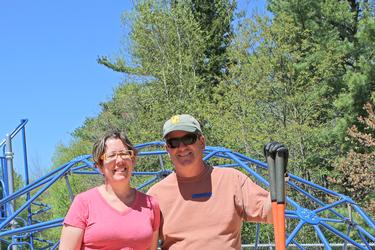