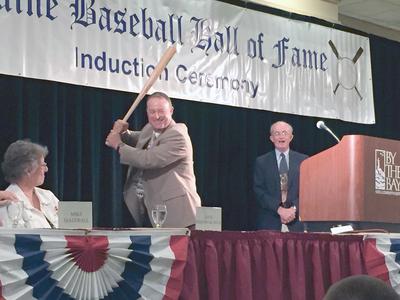 Dan Kane takes a swing with the personalized bat he was given as part of the induction ceremony. George Stevens Academy baseball coach Dan Kane was inducted into the Maine Baseball Hall of Fame Sunday, July 17.

George Stevens Academy head baseball coach Dan Kane was inducted into the Maine Baseball Hall of Fame over the weekend as part of the 46th annual induction ceremony held at the Holiday Inn by the Bay in Portland.

On Saturday, Kane and the other inductees were acknowledged on the field during a Portland Sea Dogs game at Hadlock Field, where they received a formal introduction to the fans in the stadium.

Hadlock Field is also where the Maine Baseball Hall of Fame is physically located, with photos, names and induction years on the wall.

Sunday night was the induction ceremony itself, which Kane said was an “awesome experience.”

“The Maine Baseball Hall of Fame put together a good program [during the weekend],” said Kane.

Kane had 24 friends, family, former players and representatives from George Stevens Academy in attendance for the ceremony.

Each inductee received a plaque and a personalized baseball bat.

Kane, whose most recent accomplishment was leading the George Stevens Academy Eagles to a Class C North regional championship in a walk-off win over Houlton in June. The Eagles were defeated by Sacopee Valley in the State Championship, by a score of 3-2.

Kane has been the head coach for the George Stevens Academy baseball team for 28 years, during which time he led his players to appearances in 17 Class C Eastern Maine title games, including this season’s. Of the 17, Kane’s Eagles took home nine Eastern Maine championships and three Class C state titles.

Kane won his first state championship as a coach during the 1989 season, the first time a GSA baseball team had ever taken home a title.

A graduate of Ellsworth High School and a standout on the school’s baseball team, Kane went on to play baseball at the University of Maine.