Blue Hill
Originally published in The Weekly Packet, July 28, 2016
Home on the grange
Halcyon Grange builds a community with, and beyond, farmers 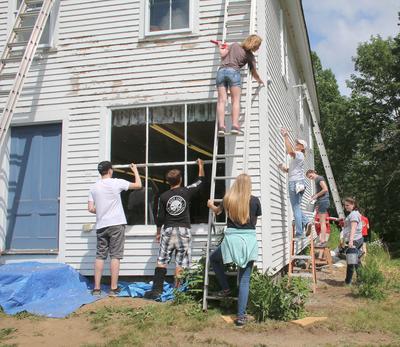 About 30 members from one of several church groups from the Carolinas that have donated their time help paint the grange on June 28.

From its white clapboard home on Route 15, the Halcyon Grange #345 has continued its steady resurgence as a gathering place for small family farmers and the community beyond.

After the grange completed a commercial-grade kitchen and insulated the first floor, a stream of live music, lectures and potlucks has passed through the 1898 hall, providing sparks to a community that tends to close its doors during the winter.

So when North Carolina-based Pastor Roger Farrell came to Blue Hill last fall, asking how they could best volunteer their time and many hands, grange member and Selectman Jim Schatz suggested pitching in to paint the outside of the hall.

This was one example of how the grange is pulling people in from the wider community, both to its events and as members. In this particular instance, the volunteers are geographical outsiders, Baptist church members from North and South Carolina.

“I was really intrigued with what they’re doing,” grange member and kitchen coordinator Yvonne Chick said. “Outside of the religious aspect, they’re doing what the grange is doing.”

Farrell, who is from Turkey County, South Carolina, had recently bought a house in Prospect and wanted to bring members of the southern church community to “plug into the community and help.”

“I love all the grange is doing,” he said, and the current volunteer effort is “a good reminder that churches help the community.”

Grange member Jacob Plowman, from Penobscot, is helping supervise the work. “It’s going good,” he said. “We’re getting the work done. It would have taken us forever [without them].”

“I’m really glad to have this help,” he said. “To hire [the job out] would be prohibitive.”

Peter Nelson is a recent grange member, who joined with his wife in April, after recently moving to Brooksville from Connecticut.

It was the monthly winter potlucks that first drew Nelson to the grange.

“My wife and I said, ‘Let’s go over,’” he said, leaning against a freshly painted wall in the shade, as over two dozen volunteers moved ladders, washed brushes and rollers and applied fresh white paint to the clapboards.

“It was a real nice bunch of people, all ages, lots of farmers, little kids,” he said.

No farmer himself, Nelson said that discovering that the grange “really is an agricultural organization” grew his interest and commitment. “I’m very much interested in promoting small farmers, growing local, eating local.”

“We make it work for everybody, monetarily. We want to be that resource,” Chick said. “It’s really taking off.”

The new kitchen and refurbished hall are the result of a capital campaign that began in 2012, with a financial push when Orland’s Victory Grange closed and donated its assets to the Halcyon Grange. The kitchen is also available for those who want to produce commercial food products. While it lacks, for now, some amenities such as walk-in freezers, its niche is “more of an incubator situation,” Chick said. “We have people who do local baking, herbal remedies, honey processing and [produce] lard from farm-raised pigs.”

Events at the grange are open to the community. This summer, a Family Farm Festival is set for Sunday, July 17, with animals, kid’s activities, local summer food, a deviled-egg contest, music by Jay Peterson and magic with Jim Picariello.

Later in the season, a baked bean supper, with music provided by The Loose Canon Jug Band is scheduled for Saturday, August 20. Scottish Country Dance classes are held weekly.

Past live music shows by local bands The Soulbenders and The New Millennium Jelly Rollers have drawn over 100 people, Chick said, and the winter educational lectures have also drawn a crowd. The annual pig roast, chicken barbecue, and Easter and Mother’s Day brunches are also big draws.

“The feedback I get, because I ask people, is there’s energy,” Chick said. “Involvement with farmers is crucial. We’ve got some local farmers who are so active. They tell people who come to their farms about the grange.”

GALLERY — Home on the grange 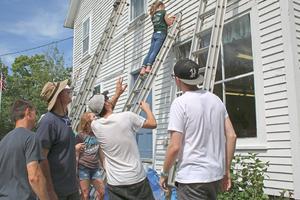 Project manager Peter Nelson, at left, directs the painters with Pastor Roger Farrell, who brought a group of volunteers from a North Carolina church to the grange. 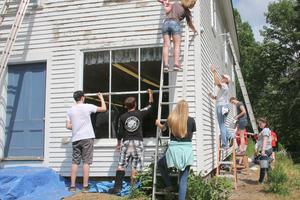 About 30 members from one of several church groups from the Carolinas that have donated their time help paint the grange on June 28. 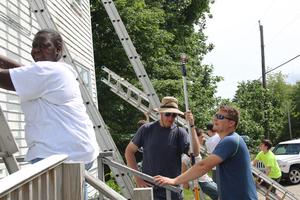 Volunteers from church groups throughout the Carolinas lend a hand to painting the church’s outside. 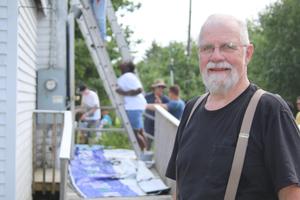 Peter Nelson joined the Halcyon Grange in April and is serving as project manager for the new paint job. 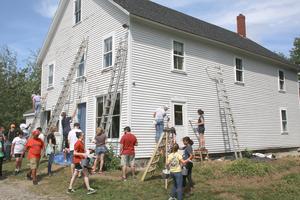 Many hands make for light work.