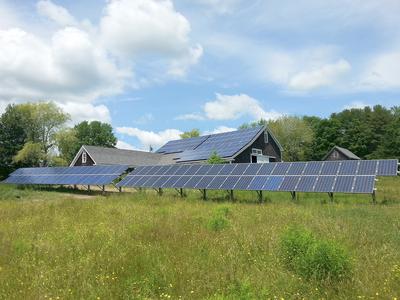 Community solar farms are popping up around the northeast, and a site in Brooksville is under consideration. This solar panel array was recently installed at an Edgecomb farm.

As people continue to look for ways to keep energy costs down and abate the effects of the extraction and use of fossil fuels on the environment, solar energy has become increasingly popular over the years. Recent developments in solar technology and how it is deployed have resulted in more options for consumers.

One such development is the community solar farm, gaining favor in northern New England, speaker John Luft said at a related talk at Reversing Falls Sanctuary on September 10. Luft is the Liberty store branch manager for ReVision Energy, a company that produces solar farms in New Hampshire and Maine, and he said the community model brings the advantages of solar energy to those who can’t necessarily install panels on their roofs.

The model begins with homeowner—or “host”—building a solar panel array on his or her property, Luft said, where construction costs are split among a group of electricity users who own shares of the solar farm. All of the electricity produced goes back to the supply grid and is automatically credited to the accounts of the solar shareholders based on their stakes in the solar farm, thus reducing their electric bills.

Luft described advantages to community solar farm model: Initial costs of equipment and construction are divided among shareholders, making them more affordable. A shareholder may live anywhere within the regional territory served by the supplying utility company, and can move to another home in the territory without sacrificing share ownership. The shareholder may also sell his or her share at any time, Luft said.

Sunlight is a good prospect for energy in the state. While Germany leads the world in the use of solar power, Maine receives 33 percent more sunlight, Luft said. And environmental factors are noteworthy, too. Around 450,000 homes burn fuel oil in Maine, which has among the highest carbon dioxide emissions per capita in the country, according to Luft, and $5 billion leave the state annually to purchase oil. But if the solar energy sector grows, it will keep jobs and money here, much like the local food economy, he said.

While the use of solar energy is growing, obstacles to community solar farms are entrenched, Luft said. He described a solar farm in Brewster, Massachusetts, in which hundreds of people—including the municipality itself—have stakes; but Maine limits community solar farm participation to nine end users, largely due to what Luft referred to as “archaic” policy, decided by the utility providers.

Luft said Maine is the only state in the Northeast that does not have a solar incentive. And although there is a 30 percent federal tax credit available, the policy expires in 2016 and will need to be renewed.