Brooklin
Originally published in The Weekly Packet, October 30, 2014
Darrell Fowler, Brooksville selectman and firefighter, dies at 67
“He leaves a big hole in this town”


Darrell Fowler, selectman and firefighter in Brooksville, showed his community spirit on Brooksville Day in August, volunteering to give folks the chance to see him “dunked” in genuine Brooksville pond water. Folwer died on October 20 at age 67.

Darrell Fowler—selectman, volunteer firefighter and family man, with roots deep in the community—died on October 25 at Eastern Maine Medical Center. He had been diagnosed with late-stage cancer, said fellow Selectman John Gray, but his death was sudden.

“He leaves a big hole in this town,” Gray said.

Fowler sat on the board of selectmen since 2009 and was in the final year of his second term. Fowler had also sat on the planning board, board of appeals and the school renovation committee. He was a volunteer firefighter for decades, serving as fire chief for eight years. Those who knew and served with him spoke of his willingness to help other.

“That was what was good about Darrell,” said Fire Chief Matt Dow. “He knew how to help people out without being noticed. He went ahead and did what he needed to do.”

Gayle Clifford, an assistant to the selectmen, said: “One of the things I thought wonderfully remarkable about him, if he heard someone wasn’t feeling well he made a point of trying to touch base with him and checking in with him. He knew the value in a small town [of] how important that was. It was appreciated by the people he spoke to and it also meant a lot to us as a community.”

Clifford also spoke of the role family played in Fowler’s life. “He talked nonstop about his love of his grandchildren and kept us up to date on their athletic endeavors and successes at school.” Fowler is survived by his wife Pam and many family members.

Fowler had many years of experience in the telecommunications industry and ran his own small telephone business, beginning in 1990. In a 2009 interview with Penobscot Bay Press when he first ran for selectman, Fowler said that being a small businessman and dealing with the public gave him skills useful to a selectman.

But he had four decades of experience with the public through his time with the fire department.

“I remember once we had a structure fire right after I first took over as chief,” recalled Dow. “There were two elderly sisters, and he got them out of the cold, then took them in his own vehicle to the fire house and stayed there and took care of them. He was there to get what they needed.”

“I served with him for over 20 years,” Dow said. “You never asked him twice. He was right there to do what needed to be done.”

As a selectman, Fowler kept himself aware of the pulse of the community.

“He was very interested and very involved with everything to do with the town,” Clifford said. “He went to meetings outside of the selectmen meetings so he could have a full knowledge of what was going on.”

Selectman Gray said that the board would continue with two selectman, himself and Richard Bakeman, until town elections in March.

“He was a wonderful selectman. He really did a great job,” said Gray. “We were looking forward to having him take over because he was the youngest one, but things don’t always work out the way we plan.” 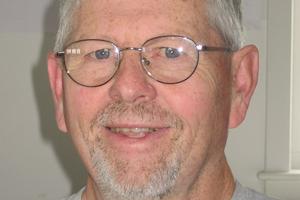 Selectman Darrell Fowler died on October 20 at age 67. He was remembered by those who worked with him in the fire department and town office as a man dedicated to his community.

Darrell Fowler, selectman and firefighter in Brooksville, showed his community spirit on Brooksville Day in August, volunteering to give folks the chance to see him “dunked” in genuine Brooksville pond water. Folwer died on October 20 at age 67.