Blue Hill
Originally published in The Weekly Packet, October 16, 2014
Taste of the Peninsula offers a slice of local culinary life
Aragosta wins 'Best of the Fest' 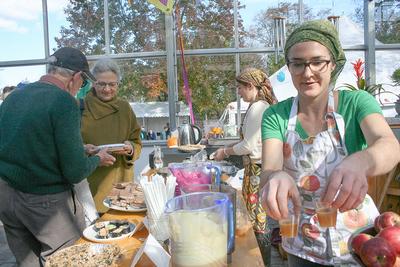 Under a canopy of gold and red autumn leaves, the ninth annual Taste of the Peninsula spread its range of flavors throughout the grounds and greenhouse of Mainscape Garden Center.

Over 600 people gathered to celebrate food, music and community at the anchor event of the Fall Festival, a Blue Hill Peninsula Chamber of Commerce event.

Aragosta Restaurant of Stonington, serving up sesame noodles and other treats created by chef Devin Finigan, won Best of the Fest through a vote of festival goers, while Rioux Catering won bragging rights for placing first in the seafood chowder contest.

“Taste” gives evidence to the wide range of culinary life from Castine to Isle au Haut. It also provides a venue for nonprofits such as the Blue Hill Heritage Trust and Halcyon Grange, and local institutions such as Blue Hill Memorial Hospital to spread some good cheer, some information and, in the case of the hospital, some warm soup.

This was also the first major event held by the chamber under new executive director Johanna Barrett.

“I’m not an event planner by nature,” she said. “But by the looks of things, it came together.”

Visitors and vendors appreciated a less crowded venue, Barrett said, with about a 100 fewer people attending and four fewer vendors than in the previous year.

She credited volunteers from Bar Harbor Bank & Trust and Camden National Bank and, naturally, from the chamber board of directors and past president.

While some restaurants and provisioners from last year were missing, such as two-time Best of the Fest winner 66 Steak & Seafood of Blue Hill, there were some new faces, too.

Anya Metcalf of Greenspeed Smoothies, which opened this summer in Blue Hill, kept the cranberry-apple-ginger juice and other samples flowing.

Chrissy Allen of Blue Hill offered information on the July 2015 visit to Castine of L’Hermione, a French-built replica of the frigate that brought General Lafayette to local shores during the Revolutionary War.

Chefs Jill Smith and Kara van Emmerik of Millbrook Company showcased the restaurant and bakery’s famous sticky buns and an overflowing platter of fresh veggies and fruit, while Beth Dixon of the Blue Hill Co-op Café—a “Taste” veteran—ladled cups of seafood chowder (for a price) and the co-op’s own hummus. Four Season Farm offered fresh carrots from a basket held by Barbara Damrosch—with help from Eliot Coleman—and El El Frijoles kept their five bowls of different salsas full despite a heavy crowd of tasters.

In all, 23 vendors representing food, art, nature, health and spirits hosted tables, while the sounds of the George Stevens Academy Jazz Combo and the Isle of Jazz filled the air.

The Fall Festival is the new moniker for what was formerly the Food, Foliage and Wine Festival. “Our board wanted something simpler,” said Barrett. The Taste of the Peninsula will also see changes in the future, she added. “There are some things we can do a little better.”

GALLERY — Taste of the Peninsula brings flavor to Blue Hill 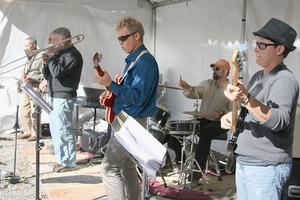 Stonington-based Isle of Jazz, featuring Silas Yates of Castine on trombone, plays for the crowd. 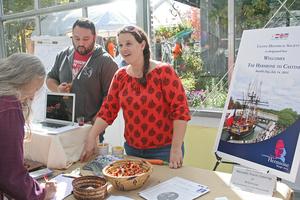 Chrissy Allen is the local representative of the L’Hermione Project, a French-built replica of the frigate that brought General Lafayette to Castine during the Revolutionary War. The ship will ‘return’ in July 2015. Husband Luke Allen helps at the information table. 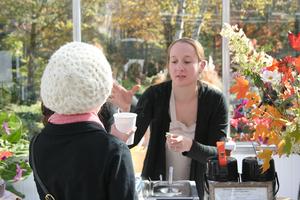 Kate Bridges serves up a taste of the Pentagöet Inn. 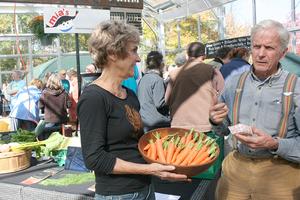 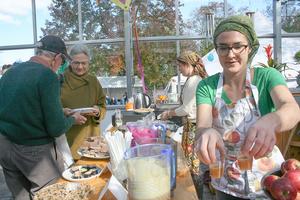