Stonington
Originally published in Island Ad-Vantages, March 27, 2014 and The Weekly Packet, March 27, 2014
Road conditions mean headaches for some, more work for others 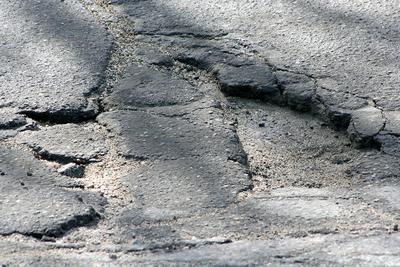 While it’s been a tough winter for everyone, Route 15 in Deer Isle and Stonington has rebelled against the freezing temperatures in a most obvious way. Here, a particularly bad stretch welcomes drivers entering Deer Isle-Stonington High School.

That’s what the drive down just about any section of Route 15 in Hancock County has become. Now, in a “mad-as-hell-and-not-gonna-take-it-anymore” move, towns along that key western county corridor are organizing to protest the conditions on the road. Kathleen Billings-Pezaris, the town manager in Stonington where the effort originated, reported to selectmen that the initial reaction to developing a united front among the affected towns has been positive.

The ball is rolling and it could roll all the way to Augusta.

Jim Schatz, a selectman in Blue Hill, has been working with Billings-Pezaris to contact selectmen in the Route 15 towns, including Deer Isle, Sedgwick, Penobscot and Orland, as well as Blue Hill and Stonington. He said there may be some benefit in presenting an organized effort to the powers that be at some type of a public hearing.

“A hearing on the topic that would bring together the ‘victims’ of this road with the ‘doctors’ who might have at least part of the cure, might be a good thing,” he said.

He said he was optimistic an organized effort could bring some results in the form of improvements on the road.

“It’s payback time for years of deferred maintenance on that road,” he said. “Pleas of poverty at the state won’t wash anymore. They need to take some remedy in hand, whether it’s bonding, taxes or a better use of resources, to make it happen.”

Route 15 is the main drag from Orland through the Blue Hill Peninsula, and its poor condition has become a burden for those who travel it daily.

Mechanics in towns along that route say the conditions on the road have contributed to more repair business for them this winter.

“We’re seeing more broken springs, struts, ball joints and tires than usual,” said Bryan McVay who operates a garage on Route 15 in Blue Hill. “The roads around here are very poor and even when it warms up, they’re still going to be in very bad condition.”

Some of the vehicles that are taking a pounding are emergency vehicles that often need to respond quickly. That takes a toll on the vehicles, according to Lt. Pat Kane of the Hancock County Sheriff’s Office. Kane said several department cruisers have been in the repair shop this winter.

More importantly, he said, is the impact the poor roads have on the ability of deputies to respond to emergencies.

“When the roads are in this condition, and you’re trying to respond to an emergency, you need to have a different pace than you’d like to go,” he said. “It does slow down response time.”

He said the people it affects the most are the firefighters and ambulance drivers. Kane said he had a report of an ambulance coming from Stonington that had to travel at about 7 or 8 mph the whole way.

“That’s always a consideration, how you take care of your patient,” said Geoff Miller, the manager at Peninsula Ambulance Corps in Blue Hill. “If you’ve got a patient with a fractured bone, you just can’t take them over these roads.”

With the roads this bad, he said, drivers consider the options when they have to move a patient to Bangor. Often the decision is to go to Ellsworth and up Route 1A. Even though it’s a longer drive, it’s a much smoother road, he said.

Although the PAC’s two ambulances are brand new and have not been pounded by the roads yet, that is always another concern when the road conditions get bad.

“The job we do is rough on a truck anyway, and when you get a rough road, it can have an impact on the budget,” he said.

If Route 15 is a key artery on the mainland, it is the only road to the island towns of Deer Isle and Stonington. Selectmen in Stonington have noted the impact the poor roads will have on the local economy, particularly the lobster industry.

The roads are a factor for the fishing industry, according to Ronnie Trundy, the manager at the Stonington Lobster Co-op.

Although he said he couldn’t determine whether the roads have had a direct impact on business this winter, Trundy said the road conditions are having an impact on the drivers and their rigs.

“I know the drivers certainly don’t want to come down here anymore, and it can’t be good on the lobsters bouncing around like that,” he said. “I don’t know anybody who has $100,000 tied up in a truck who would want to bring it down here with product on—or empty for that matter.”

The concerns of the towns may already have been heard at MDOT. Spokesman Ted Talbot said Tuesday that one of the engineers had driven sections of the road that day to assess what was happening.

Talbot noted that MDOT has a three-year work plan that does not currently include Route 15, but he said the department is reassessing that plan and looking at problem roads like Route 15 and others affected by the rough winter.

“As we look at the roads statewide and prioritize, roads like Route 15 will come into focus,” Talbot said.

He echoed local officials when he said that addressing the problems on Route 15 will need much more than a skim coat. That road needs a reconstruction, he said.

Talbot did not have a timeline for any action on the road, noting that the MDOT’s process has to be one that is statewide.

The local effort to pressure the department to make improvements could go beyond MDOT officials and directly to the Legislature’s transportation committee. In Stonington this week, selectmen suggested going even higher than that and taking their case directly to Gov. Paul LePage and to make their plea on economic grounds.

However the towns approach the issue, it will likely take a little time to organize. Billings-Pezaris said that a meeting of officials from the towns will be needed to discuss how to approach the department and the state before actually setting a meeting. That strategy session could happen within the next few weeks, but a larger meeting, with state officials, will likely take a little more time to organize. 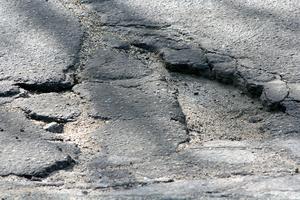 While it’s been a tough winter for everyone, Route 15 in Deer Isle and Stonington has rebelled against the freezing temperatures in a most obvious way. Here, a particularly bad stretch welcomes drivers entering Deer Isle-Stonington High School. 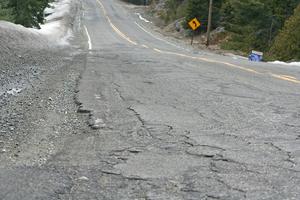 Leaving or entering Blue Hill, Maine, the Mines Road way? Drivers are living through what could be the worst stretch of broken asphalt, gaping potholes and small mountains of raised pavement on the Peninsula.